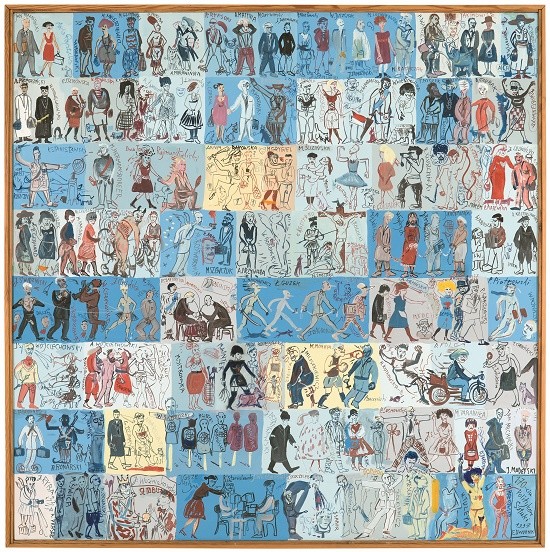 Originator, producer, scriptwriter, location manager, director, anchor… If he had his own talk show, he would speak on every subject. That’s Dwurnik for you. He observes, interprets, provokes, shocks, and above all makes fun of surrounding reality in that special way he has. And reality, in all its many colours, provides him with constant stimulation to create. The result: some 5,000 paintings and 10,000 drawings. As the author of the Hitch-hiking series offering a bird’s-eye view of Polish cities, he mocks topography and perspective, filling his canvases with artefacts. In the Sportsmen series, he manifests blunt realism and the grotesque. These are grey citizens of People’s Poland, who love Sport non-filter cigarettes. They include soldiers, prostitutes, farmers, drunks – the dregs of society that were the mark of communist Poland. In 1981 his cycle entitled Warsaw presented a prophetic vision of martial law: barbed wire and tanks on the Polish capital’s streets. In those times, he was stuck between a rock and a hard place. The ‘Solidarity’ union understood his works but not his stance towards the communist authorities. The government appreciated his inclination to make concessions without understanding his work. Always rebellious, debunking falsehood like a child crying that the emperor has no clothes – he did not hesitate to polemicize with Christianity, visualizing the Passion of Christ in the 20th-century reality of urban squares and construction sites. And in 2010 he painted his own version of Matejko’s Battle of Grunwald. So it’s no surprise that due to his courage, uncompromising attitude and infernal sense of humour, he was the only Polish artist to achieve international success before the political transformation, and fascinates art consumers to this day regardless of their origins, social status, tastes, age, gender and vaccination card.