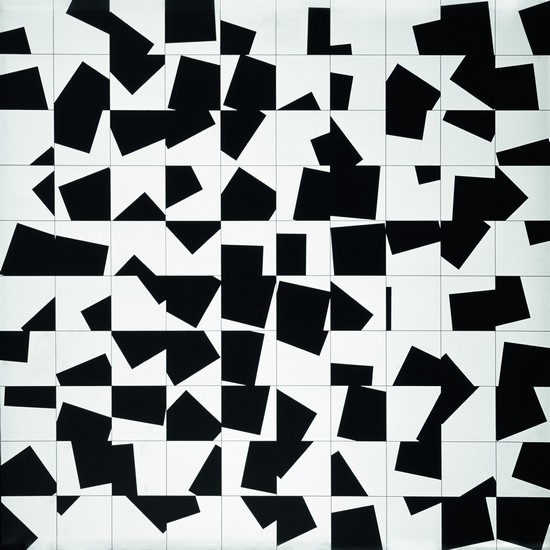 Even if one painting by Winiarski is confusingly similar to another, no two are identical. You could say that in the case of visual arts that’s completely natural. However, Winiarski created his pictures – which he called areas – with the help of square modules, which meant there was a risk of repetition in his art. But he didn’t have to concentrate on making an arrangement of little squares on one canvas different from that on another, because the arrangement was ruled by pure accident, as a result of which a system was created, and as a consequence – a work. He drew inspiration from everything, like the numbers printed on tram tickets or stock exchange boards. Some of his works were determined by rolling of dice. Initially he used mainly black and white. White and black squares filled the spaces of consecutive canvases. Their arrangement and colour was decided by a thought process resulting from random numbers and events. It was this process that was much more important to Winiarski than the final result in a picture. This is clear from the artist’s descriptions on the back of his works or next to them, explaining their origins. With time, Winiarski started using additional colour, and then brought a third measurement into his art, creating three-dimensional works. He sometimes left an ‘empty zone’ – no figures in a given area – among an accumulation of squares, as a result of which the picture featured an asymmetrical ‘gap’. At other times, he applied a border line running in a random direction, which created strange, also non-symmetrical shapes and solids. He wasn’t interested in creating works of art in a traditional sense. He wanted to translate problems from science into visual language. And he fulfilled this desire.