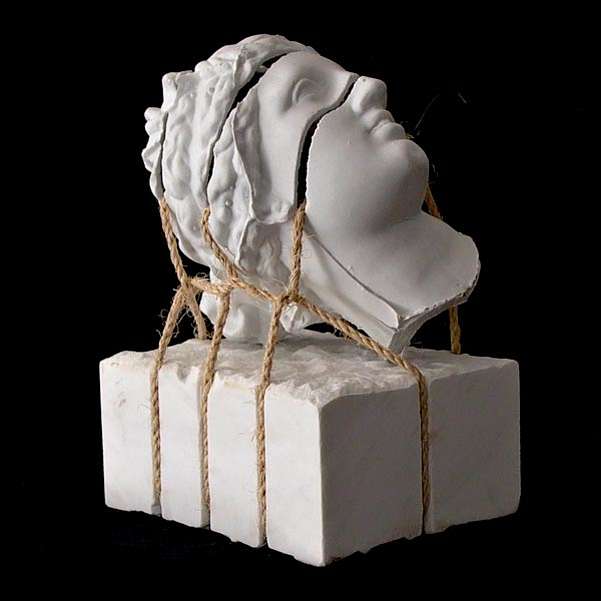 While still in secondary school, she did not want to choose between visual arts and music, and attended both an arts and a music school. She found sensuality to be the common denominator between different disciplines of art. At first, it took the form of overt eroticism which was unbearable for communist censors. This was the case of Erotic Pillows inspired by the imprint her body left on the bedsheets. She chose stone as her go-to sculpting material, which implicated one of the key contracts explored in her art: the coldness of the material versus the hot subject-matter of human sexuality. She said: ‘When erect, stone repels and repulses, when laid horizontally, it is like a woman: it surrenders, works with you, it accepts you.’ Her sculptures were ‘petrographic juxtapositions’: she mixed and matched different types of stone, dark and light colours, smooth and rough surfaces. With time, influenced by the death of her loved ones, Falender departed towards abstract geometry. ‘Only abstract form can covey the mystery of death,’ she said. The last period of her work was dominated by aggressive, harmful treatment of paragons of classical beauty. The first sculpture created by a young Falender who did not yet know whether she’d like to become a pianist or a sculptor was a head of Chopin made of clay. When the clay dried and cracked, the head fell into pieces. This childhood drama later found an echo in cracked/cut heads of Medici Venus. For most of her pieces Falender made temperamental sketches which may be treated as self-standing pieces of art.