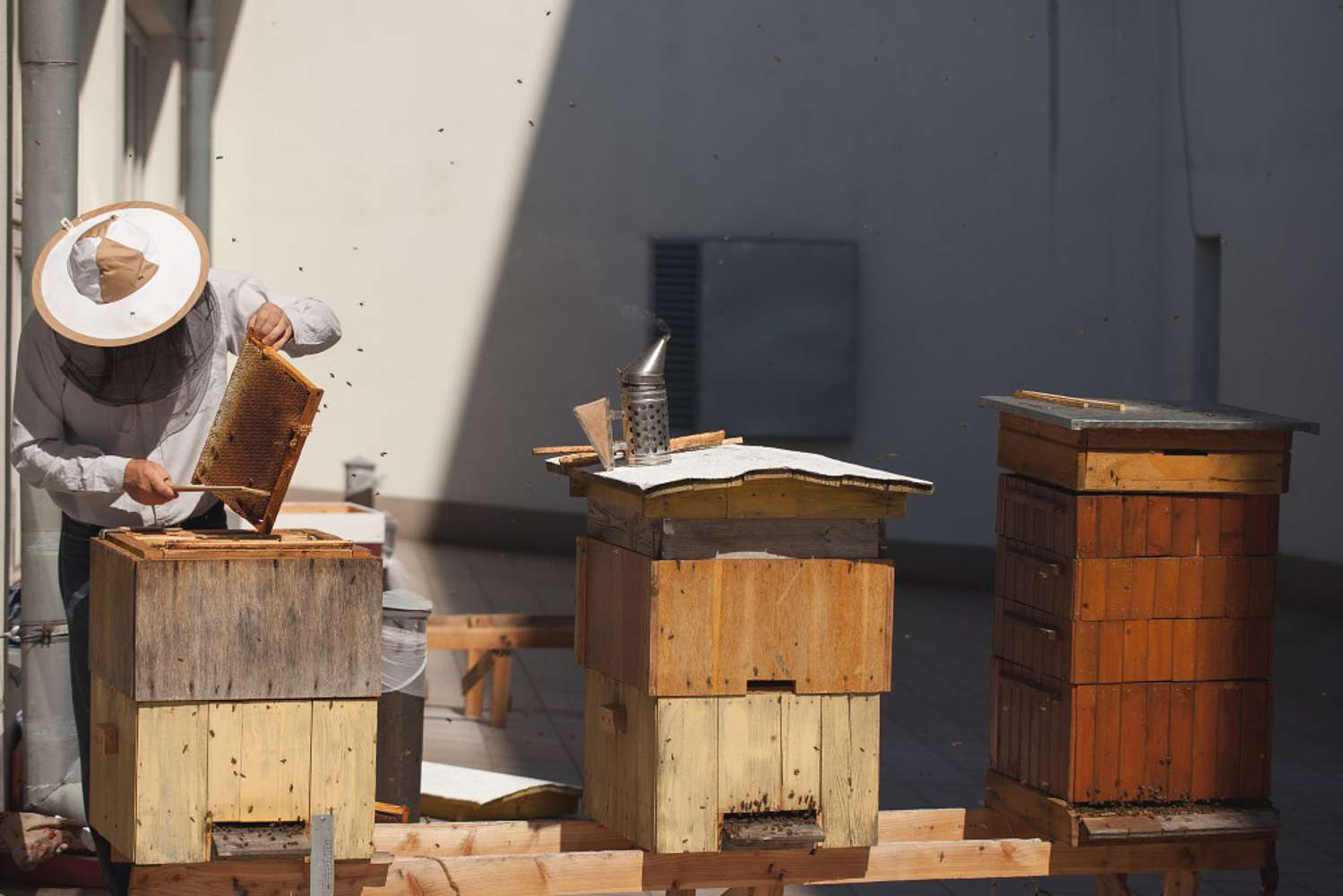 Almost 500 species of bee are native to Poland. The most popular ones are bumblebees, mason bees, Xylocopinae, Megachile, Colletidae, mining bees, and many more insects known by charming names, if foreign to the layman’s ear. What most of us mean, when we say the word ‘bee’ is the honey bee (Apis mellifera). This is the species that inhabits man-made beehives, produces honey, and remains the smaller, yet one of the busiest domestic animals.

An average beehive is home to a few thousand honey bees. They are all one, big family – each was once a small egg laid by the same queen bee. She is the most important figure in the hive, always surrounded by a court of her daughters, who clean, feed and water her. Despite all the privileges, the life of a queen bee is filled with hard work, just like every other bee’s in the hive. She lays eggs into honeycomb cells, which is a truly titanic task. Most bees live only a few days – for the hive to hum with life, the queen bee has to lay even 2000 eggs a day.

Hatching from the eggs are maggots, or larvae of bees, which look like fat, white bugs. As it is natural for a well-organised community, each maggot obediently stays in its cells throughout its childhood. In the meantime it is fed by its elder sisters with honey, flower pollen, and so-called royal jelly. When the larva is big enough, the worker bees seal the entrance to its cell with wax to ensure that the maggot has the peace and quiet needed to develop into an adult bee. After the larva transforms into a pupa, it bites through the wax cover and gets out of the cell. It it is female, it immediately starts as a working bee. At first it is active in the hive only, cleaning, feeding larvae, producing wax, building honeycombs, or guarding the hive’s entrance. Later, it becomes a forager and is sent outside to collect nectar, pollen, and water. She carries on in this job for the rest of her life, which usually comes a few weeks after the pupa bites her way out of her cell. Only those worker bees which come to this world at the end of the summer live longer and may survive the whole winter.

One mother and many fathers

Worker bees are the most numerous group in the colony, yet also male bees hatch from the eggs laid by the queen bee. Drones never do any work; they do not even eat on their own – they are fed by their sisters. That is why the word „drone” is synonymous with a person who does no useful work and lives off others. A male bee has one task only: to become a father. When the reigning queen bee dies, moves out of the hive with some of the colony, or when she is too old to fulfill her duties, worker bees begin to prep her successors. Special queen cups appear in the honeycomb. The maggots that end up in them are fed a special diet rich in royal jelly. As a result they transform into young queen bees, not simple workers. Only one will become a mother, though. It will be the one that hatches first and kills her rivals with her sting. This way Nature selects the strongest specimen to become the next queen bee. Next comes the nuptial dance in the process of which the queen searches for the strongest father. She soars high in the air where only the fastest and most determined drones are able to mate. She usually mates with a few males and stored their sperm in her body for the rest of her life using it up to fertilize eggs in the course of the next few years. Drones face a grimmer fate: those that have mated die instantaneously the remainder live a little longer, yet being useless, they are thrown out of the hive in the autumn and dies of starvation.

Bees live almost exclusively off flower pollen and nectar that they collect. Without flowers there would be no bees. The dependency works the other way round as well: without the insects there would be no flowers. Plants develop  colorful petals, beautiful scents, and sweet nectar precisely with the little winged pollinators. The collaboration between plants and bees goes over 100 million years back and has been highly beneficial to both parties. A forager bee sucks nectar from the bottom of the flower and collects it in her honey sac, a distension of the esophagus. The sweet load may be half of the bee’s overall weight. After the forager’s return to the hive, workers take over the nectar, mix it with their saliva and spit out into the honeycomb cells. Next, you need to wit until water evaporates from the mixture, a process quickened by gusts of dry air produced by hundreds of bee wings. Mature honey mainly consists of sugar, which makes it a durable food reserve for the whole family. Apart from nectar, bees also collect pollen. While harvesting on a flower, pollen sticks to the hair covering the forager’s body. She then brushed down pollen particles which special combs on her limbs and deposits them in special baskets located on the hind legs. Later, the pollen collected in honeycomb cells undergoes fermentation and is turned into nutritious beebread.

What’s in it for the plants? Simply speaking: the seeds. Moving around from flower to flower, bees transport pollen with them. Even if most of it ends up in their baskets, a few grains will always find their way to the pistil of another flower of the same species. This is how pollination happens, which is necessary for fruits, and the seeds which they contain, to be produced. Many other insects act as pollinators, including butterflies, beetles, and flies, yet none are as effective as honey bees. First of all, the hair covering bees’ bodies s an excellent transporter for pollen. Secondly, bees are the only inspects that stay loyal to flowers. This means that once foragers from one colony start harvesting nectar from apple trees none will ever collect it from pear trees, even if they grow nearby. Only after apple trees stop flowering, the whole beee squat switches to another species. As a result, apple tree pollen is much more likely to end up on an apple tree than a flower of a different species. And that’s precisely what plants want.

Handsome fruits and multiple seeds from useful plants are also what we, humans, want. That is why, effective pollination is so important for our fields and orchards to prosper. Apples, pears, plums, cherries, raspberries, melons and watermelons, sunflowers, apricots, oranges, pumpkins, tomatoes, cucumbers, papers, almonds, kiwis, rape, coffee – we owe all of these, and much more, to none other than bees. Even the clothes we wear have been made from fiber acquired from the fluffy bolls of cotton plants!

Pollinators play a crucial role in agriculture. In the European Union only, their work is worth an estimated 16 billion euro a year. In this gigantic effort, honey bees kept by humans are assisted by their wild cousins. Yet, bees find it more and more difficult to survive in the man-manipulated environment. Once abounding in different pieces of flowers, meadows and forests have been turned into fields where only one plant species is grown. Even if it produces nutritious nectar and pollen, it flowers only for a fraction of the year. One solution to this problem that has been suggested are movable apiaries. Hives are loaded onto vehicles and moved from one place to another, starting from rape fields, then successively transported into areas populated by acacia, linden, buckwheat, and heather. Obviously, it is highly beneficial to owners of rape and buckwheat fields. In the Western world, beekeepers charge substantial fees for renting out their pollinators to farmers, sometimes earning more than from honey sale. What about wild bees who cannot afford the luxury of traveling from one site to another to forage? Another stumbling block both honey bees and their wild cousins face are the insecticides used by humans. True, they kill off pests, yet they are also pose a deadly threat to pollinators.

Considering the above, it turns out that cities are pretty comfortable places for bees to live. Our back gardens, balconies, and parks bristle with a great variety of flowers, providing bees with nourishment the whole year long. Insecticides are also decidedly less frequently used in cities than in farmlands. Finding an appropriate dwelling may potentially be the only hurdle. Wild bees, such as mason bees, eagerly nestle in all sorts of cracks and holes. With them in mind, special insect hotels are set up in cities, to provide pollinators with the needed shelter. They are small, roofed boxes filled with reeds and wooden blocks with drilled holes. Naturally, honey bees are accommodated in hives, which are set up on rooftops in city centers in increasing numbers nowadays. In Warsaw such cloud-clapped apiaries can be found on the roofs of the Palace of Culture and Science, a few shopping centers, the Regent Hotel, the headquarters of Gazeta Wyborcza, and, as of recently, the Teatr Wielki – Polish National Opera. The honey produced by urban bees meets every quality standard and owes its unique taste to the many exotic plants grown in Warsaw parks and gardens.

The opera apiary is kept by Tomasz Petryka of www.miodemslodzone.pl

Apiary at the Wielki