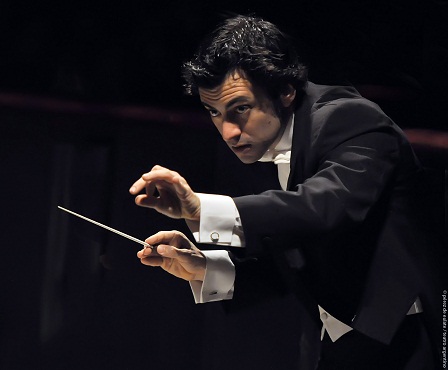 From 2005 to 2007 he was Christoph von Dohnanyi’s assistant with the NDR Symphony Orchestra. He has already worked in close collaboration with the composer Peter Eötvös since his early conducting days. As his assistant, Pérez premiered two operas: Angels in America (Théâtre du Châtelet Paris) and Lady Sarashina (Opéra de Lyon and later at Opéra Comique in Paris). In 2008, he conducted Eötvös’ Of Love and Other Demons at the Lithuanian National Opera.

Between 2009 and 2012, Alejo Pérez was musical director of the venerable Teatro Argentino de La Plata, the most important Argentinian opera house after the Teatro Colón, bringing it to new success. Praised by the press and audiences alike, he produced great works of the opera and concert repertoire, among these new productions of Verdi’s Don Carlos, Berlioz’s La Damnation de Faust, Shostakovich’s Lady Macbeth of the Mtsensk District and Wagner’s Tristan und Isolde and Rheingold.

In the 2010/11 season, Alejo Pérez was invited to be guest conductor at the Teatro Real Madrid where he has since regularly performed with the Orquesta Sinfónica de Madrid. He conducted the highly acclaimed performances of Rihm’s Die Eroberung von Mexiko (director: Pierre Audi), as well as concerts with the soloists Eva-Maria Westbroek and Plácido Domingo. In 2012, he was hugely successful with the concert version of Wagner’s Rienzi as well as with a production of Golijov’s opera Ainadamar (director: Peter Sellars) in Madrid, and in 2013, with Dimitri Tcherniakov’s production of Mozart’s Don Giovanni.

Numerous engagements have led him to the great international opera houses; he has conducted L’espace dernier by Pintscher at the Opéra Bastille, Henze’s Pollicino and Stravinsky’s Le Rossignol in Lyon, Rihm’s Jakob Lenz in Antwerp, Maderna’s Satyricon in Buenos Aires, Don Giovanni in Frankfurt, Shostakovich’s The Nose in Rome, and Dessau’s oratorio Deutsches Miserere in Leipzig.

In the 2014/15 season, Alejo Pérez conducted the Gürzenich Orchestra (Mozart, Strauss, Kurtág), Britten’s Death in Venice at the Teatro Real (director: Willy Decker), Schreker’s Die Gezeichneten (director: David Bösch) at the Opéra de Lyon. The highlight of the season will be his debut with the Mozarteum Orchestra Salzburg and Massenet’s Werther (soloists: Elīna Garanča, Piotr Beczala) in concert version at the Salzburg Festival.