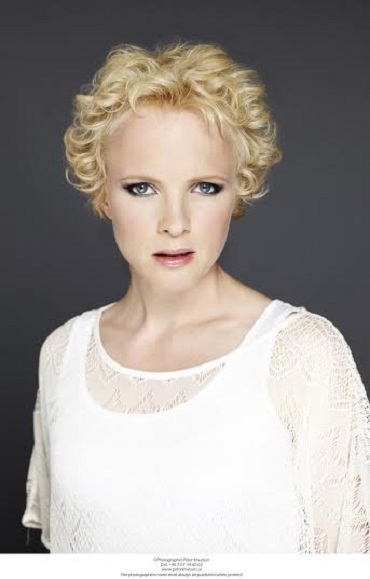 She trained at the University Collage of Opera in Stockholm. Her repertoire includes such roles as Lulu in Lulu by Berg (Gothenburg), Wendla Bergmann in Frühlings Erwachen Benoît by Mernier at La Monnaie, Kristin in Julie by Boesmans at the Festival d’Aix-en-Provence and at La Monnaie, Blondchen in The Abuction of from the Seraglio, Servilia in The Clemency of Tito, Olimpia in The Tales of Hoffman, Oskar in A Masked Ball, Music and Euridice in Orfeo by Monteverdi, Ophelia in Hamlet, Gretel in Hansel und Gretel, Julia in Romeo and Julia at the Oper Frankfurt, Opernhaus Zürich, La Monnaie, Wiener Festwochen, Deutsche Oper am Rhein and Royal Danish Opera; Iris in Semele (directed by William Christie) at the Theater an der Wien, Gilda in Rigoletto and  Violetta in La Traviata in Weimar, Gilda and Adela in The Bat at the Royal Swedish Opera in Stockholm, Zerlina in Don Giovanni at the Festival d’Aix-en-Provence and Bolshoi Theatre in Moscow, title role in Lucia di Lammermoor in Gothenburg, Hanako in Hanjo by Hosokawa with the Ruhr Triennale, Zofia in The Knight of the Rose at the Grand Théâtre de Genève, and Giulietta in The Capulets and the Montagues with the  opera of Göteborg.

Among her latest successes are the role of: Despina in Così fan tutte (directed by Michael Haneke) at Madrid’s Teatro Real, La Monnaie in Brussels, and at Wiener Festwochen, Euridice in Orfeo and Euridice in Gothenburg, Atalanta in Serse at Stockholm’s Artipelag (conducted by Jean Christophe Spinosi), and the part of soprano in Schwanengesang D744 (directed by Romeo Castellucci) in Avignon, La Monnaie, and Paris.

She has also starred in the film The Casanova Variations with John Malkovich. She will perform at this year’s Bregenzer Festspiele as Olimpia/Giulietta in The Tales of Hoffmann (directed by Stefan Herheim).

She has recorded CDs as Kristin in Boesmans’s Julie (Cypres), Amor in Gluck’s Orfeo and Euridice Glucka (Naxos), and soprano in Händel’s Messiah (conducted by René Jacobs, Harmonia Mundi), as well as DVDs: in Christoph Loy’s praised production of Mozart’s The Abduction from the Seraglio (Oper Frankfurt).

She has collaborated with such directors as: Luc Bondy, David McVicar, Christoph Loy, and Kasper, and sung under: Daniele Gatti, Kazuchi Ono, René Jacobs, Emanuelle Haïm, Esa-Pekka Salonen, and more.