17 July marks 90 years since the composer was born. 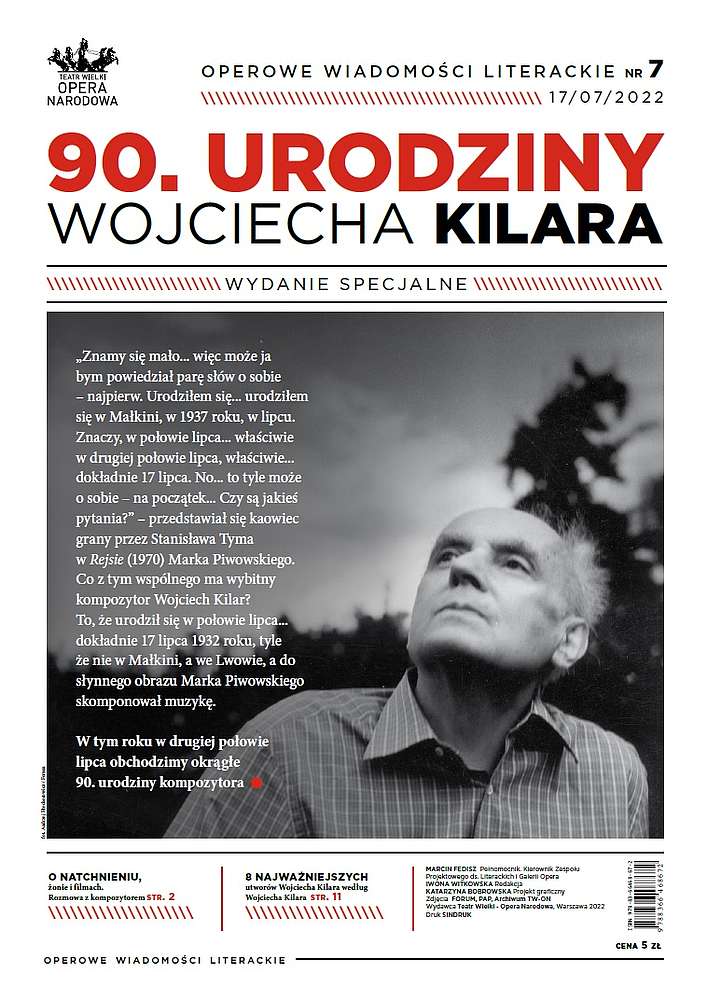 Looking at his legacy, it is hard to believe that it was left behind by a single man. Over 130 film scores, symphonic works, chamber pieces, and music written for special occasions – Wojciech Kilar went down in the history of Polish music, securing a lasting place among such composers as Bacewicz, Baird, Serocki, Lutosławski, Górecki, and Penderecki who made Polish 20th-century music a part of the international cultural fabric.

Like Henryk Mikołaj Górecki, Kilar was a composer with excellent communication skills, especially when after years of ‘being the avant-garde’ he turned to tradition and such expressive composition means as contrast, repetition, and reduction, which he infused with the Polish idiom, in particular of his favourite highlander variety. Today’s audiences are still stirred when hearing pieces such as his Bogurodzica, Krzesany, Kościelec, the moving Missa pro pace written in 2000 as a plea for peace in the new millennium, or Piano Concerto (he was an excellent pianist as well).

Wojciech Kilar’s art was his new truth. At the same time, together with Górecki and director Kazimierz Kutz, two native Silesians, he defined the Polish face of the region with which he was associated most of his life. Perhaps one of his most extraordinary artistic accomplishments was the fact that he managed to retain a sensitive Lviv heart, which is idiomatic in Polish culture, while also boasting the typically Silesian grit, accurately defined by Kutz as the ability to continue from generation to generation in a state of permanent discomfort.

Here, at the Polish National Opera we have commemorated Wojciech Kilar’s 90th birthday with a gala concert and two new ballet productions with his music: Dracula and Exodus, which will return to our stage next season. Wojciech Kilar remains an integral part of our theatre’s artistic life. [Today] we celebrate his work, charismatic personality, and beautiful soul. He was one of the most luminous figures in Polish culture.