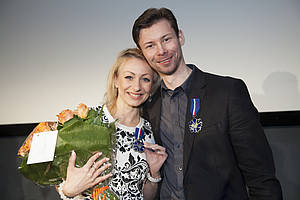 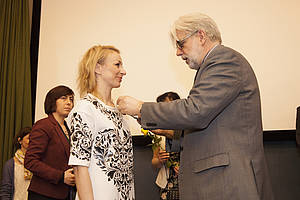 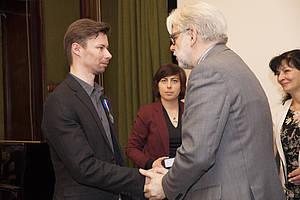 International Dance Day 2014 brought great recognition to two more artists of the Polish National Ballet. The minister of culture and national heritage granted Gloria Artis Silver Medals for service to culture to Aleksandra Liashenko and Sebastian Solecki for their achievements at Polish theatres. The medals were presented by the director of the Ministry of Culture and National Heritage’s Department of National Culture Institutions, Zenon Butkiewicz PhD, at a ceremony on 28 April 2014, on the eve of International Dance Day, at the headquarters of the Association of Polish Stage Artists (ZASP) in Warsaw.

ALEKSANDRA LIASHENKO comes from Kharkiv in Ukraine, where she studied dance and debuted at the National Academic Opera and Ballet Theatre. After working for five years in Ukraine and winning two main prizes at international ballet competitions there, she moved to Poland in 2007. Initially performing in Gdańsk and Poznań, she has been one of the Polish National Ballet’s leading principal dancers for the past five years. During this time she has danced most of the main parts from the Teatr Wielki – Polish National Opera’s repertoire. She has created brilliant interpretations in ballets such as The Sleeping Beauty, Cinderella, La Bayadère, The Nutcracker and the Mouse King, Tristan, Kurt Weill, And the Rain Will Pass…, A Midsummer Night’s Dream, Hamlet, two different productions of Romeo and Juliet as well as several other contemporary ballets. She is the pride of our theatre.

SEBASTIAN SOLECKI is a graduate of the Poznań ballet school and performed at Poznań’s Teatr Wielki for nine years. He interpreted many leading roles in classical and contemporary ballets, attaining the highest position of principal dancer at the Poznań theatre in 2006. He has been a soloist of the Teatr Wielki – Polish National Opera’s ballet company since 2007 and performs in almost all of the Polish National Ballet’s repertoire. His achievements in Warsaw include a number of solo parts in classical ballets, but in recent years he has been valued especially for his performances in contemporary ballets by Krzysztof Pastor (Tristan, Kurt Weill, And the Rain Will Pass…, Romeo and Juliet), Ed Wubbe (The Green), Jacek Przybyłowicz (Six Wings of Angels), Robert Bondara (When You End and I Begin…, Persona) and Jacek Tyski (In Search of Colours, Afternoon of a Faun, Hamlet).