To break the spell of isolation, we would like to invite you now for an unforgettable journey across the old continent: a journey in space and time with our six new productions. 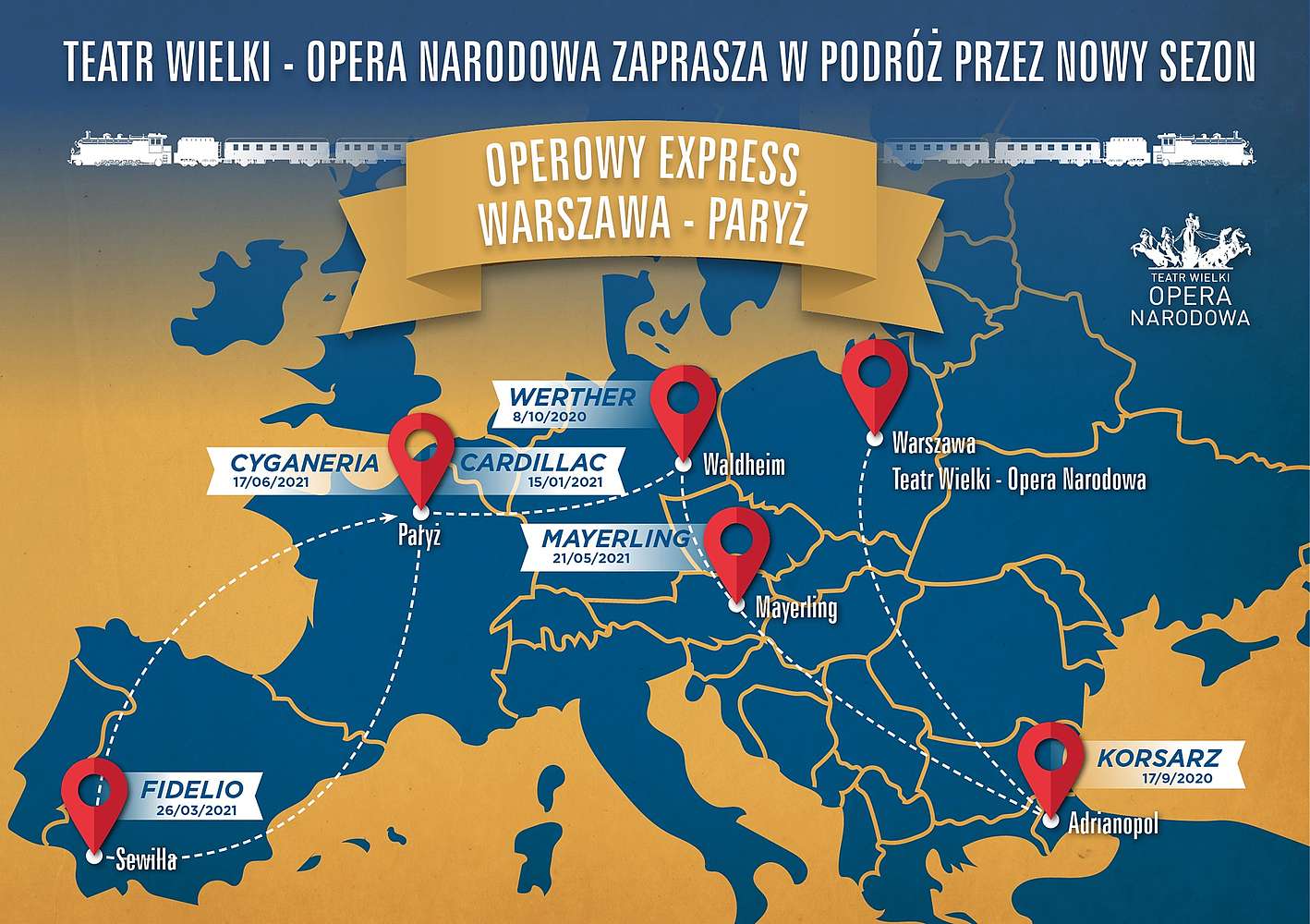 ‘Music is passion, love and longing,’ wrote Richard Wagner. It is into this world of different kinds of love, passion and longing, as well as intrigue and drama, that the Polish National Opera would like to invite its audience this season. The Covid-19 pandemic has closed the doors of private homes and opera houses across the world. Lockdown made it impossible for many to experience the arts in person. During this extremely difficult time we took it upon ourselves to reach out to our audience through the traditional and social media, and our online streaming service.

During confinement we were also deprived of another precious thing: the freedom to travel and get to know the world. Previously open to all, the borders within the European Union shut for most. Many of us spent their summer holidays at home. To break the spell of isolation, we would like to invite you now for an unforgettable journey across the old continent: a journey in space and time. Passports are not required. All you need is a ticket to the opera and an open mind. Sit back, relax and enjoy your trip on the opera Orient Express from the environs of Istanbul in Turkey to Paris, France.

The first station on the route is Edirne, historically known as Adrianople, founded by the Roman Emperor Hadrian, then captured by the Ottoman Empire. Set to a score by Adolphe Adam and abounding in brilliant dance sequences, the production of Le Corsaire opening at the Teatr Wielki this season will take you to a place that brings together classical and oriental beauty, a place where minarets rise high into the air among Greek columns.

From this cultural melting pot where Western and Eastern influences intermix we will follow in Werther’s footsteps to a provincial town of Waldheim in Saxony, where our young protagonist will succumb to frenzied passion that will bring him to the edge of despair. Your guides will be Germany’s Willy Decker, who staged the production, and France’s Jules Massenet, whose score dazzles with lyricism, sensuality, and extraordinary theatricality. Unintentionally, although characteristically for the director’s non-literal stagings, Mr Decker’s Waldheim will become a portal that will transport you from the Orient into the Paris of the future.

Murder on the Orient Express

Just like the characters in Agatha Christie’s novel, the passengers of our opera Orient Express will be confronted with a murder mystery. The premiere of Cardillac will transport us to deserted streets of Paris, where the audience will witness a series of chilling merciless murders. Diamonds prove not to be a girl’s best friend, as Norma Jeane aka Marilyn Monroe would have it, but a murderer’s object of desire. Just like in a Buñuel’s film, darkness conceals the real motives of the opera’s eponymous character for whom human life is worth less than lavish gemstones.

Cardillac is an intriguing production with unsettling sets as well as a unnerving musical journey. Already in the first bar, the composer Paul Hindemith surprises his listeners with a cynical duo of two flutes that does not correspond with the action. His music is often ironic, provocative, even brutal. His opera caused scandals which he would shrug off: booed off by the audience he did his thing just like Ringo Starr after replaced Pete Best as the Beatles’ drummer. Hearing angry protestations from the fans at a gig, he calmly sat down behind his set and drowned down the calls of disapproval, winning the due with the crowd.

Those with tickets to Fidelio will set off with us to the Iberian Peninsula following Leonore on her quest to find her imprisoned lover. Both the opera’s libretto and Beethoven’s music inspired by the Enlightenment’s humanism is an apotheosis of freedom, human dignity, the man’s heroic battle against the odds, and joy if life. The work will be a hit with all those that love a happy ending. Those that prefer to experience a catharsis induced by dramatic events are more than welcome to join us in the salons of Vienna and on a trip to Mayerling, where Prince Rudolf and Maria Vetsera’s love affair came to a tragic end. You will hear the score of Franz Liszt, whose concerts brought on mass hysteria at a time when music performances did not cause this kind of excitement. When he played young women screamed, weeped and fainted. After he went off stage, they fought to get a piece of his clothing or a string ripped from his piano.

We will end our journey back in Paris, sneaking a peek into an attic inhabited by four bohemians. We will join them at a table in Café Momus, visit nearby street bazaars and Parisian taverns overlooking the Seine. Barbara Wysocka’s modern staging of La bohème will undoubtedly surprise many. The four stories, although different, form a whole. Puccini’s music is equally diverse. With its varied rhythmical patterns and multicoloured instrumentation, it perfectly paints the atmosphere of every single scene. You will hear in it carefree joy and deeply compelling tragedy.

Set out with us on a one of a kind journey across the continent. Despite travel restrictions, the nations of the European Union come together in their economic and political efforts to fight the pandemic. We propose yet another type way to be together at this time. To quote Polish artist Zbigniew Lubicz-Miszewski: ‘Music is the only means of communication that unites all nations and cultures; it can glue together a thousand pieces of a broken mirror in which we can see and understand each other.’

HOW TO BUY YOUR TICKETS