Krzysztof Pastor, the director of the Polish National Ballet, recently announced the company’s plans for the 2013/14 season. As many as four ballet premieres will take place on the Teatr Wielki’s two stages. 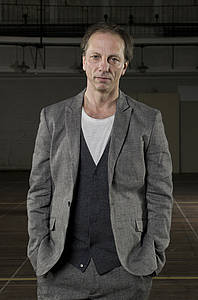 Krzysztof Pastor, the director of the Polish National Ballet, recently announced the company’s plans for the 2013/14 season. As many as four ballet premieres will take place on the Teatr Wielki’s two stages. The Shakespearian cycle, which began with John Neumeier’s A Midsummer Night’s Dream in the 2012/13 season, will continue with Jacek Tyski’s Hamlet which premieres on the Chamber Stage on 3 October, followed on 7 March by a new version of Romeo and Juliet choreographed by Krzysztof Pastor. The latter show is a co-production with the Joffrey Ballet from the United States where it will premiere in late April 2014.

The second new chamber ballet will be a ballet evening called Obsessions, its premiere scheduled for 29 March, which next to Krzysztof Pastor’s earlier Moving Rooms will feature his new ballet to music by Franz Schubert and a revival of Emil Wesołowski’s Returning Waves to music by Mieczysław Karłowicz, from the Teatr Wielki’s early ballet repertoire. The season’s final premiere, on 29 May, will be Marius Petipa’s classical spectacular ballet Don Quixote in the Moscow choreography by Alexei Fadeyechev; this is a co-production with the Hong Kong Ballet from China and with the Royal Ballet of Flanders at Antwerp.

Apart from premieres, we have chosen a number of other Polish National Ballet productions for presentation in the coming season: Bach Dances with ballets designed by Balanchine, Pastor, Wesołowski and Wubbe, Neumeier’s A Midsumer Night’s Dream, Echoes of Time featuring pieces by Forsythe, Page and Pastor, van Schayk and Eagling’s The Nutcracker and the Mouse King, and The Rite of Spring in the versions by Béjart, Gat and Nijinsky. The 5th Days of Dance are planned for 6-16 November 2013 and will include performances by the Cullberg Ballet, Lithuanian National Ballet, Opera Nova Ballet from Bydgoszcz, Kielce Dance Theatre, Baltic Dance Theatre from Gdańsk, and the Polish National Ballet. As in previous years, on 5 April 2014 the participants of the latest choreography workshops, Creations 6, will present their new ballet miniatures on the Chamber Stage.

Apart from performing at its home theatre, the Polish National Ballet has also accepted invitations to the Didur Festival in Sanok, Gran Teatre del Liceu in Barcelona, and the Lithuanian National Opera and Ballet Theatre in Vilnius. In the latter half of the season Director Krzysztof Pastor will be completing two major choreographic productions abroad: Romeo and Juliet with the Joffrey Ballet in Chicago and The Tempest, also based on Shakespeare, at the Dutch National Ballet in Amsterdam.