Bartosz Anczykowski, a soloist of the Polish National Ballet and one of the dancers playing Sancho Panza in our latest production of Don Quixote staged in association with the Royal Ballet of Flanders, has been invited to Hong Kong. 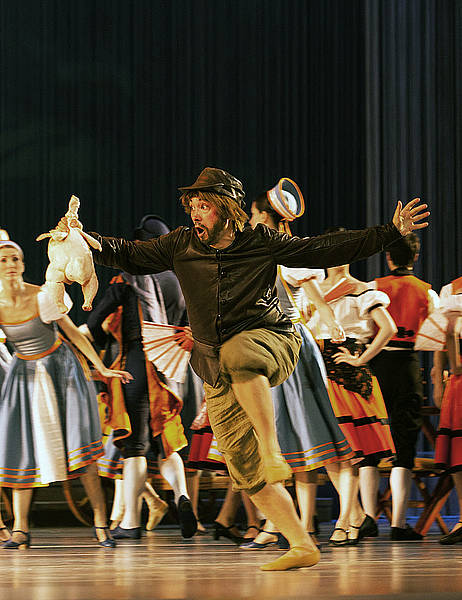 He will be a guest performer of the same role in a premier of Marius Petipa’s classical ballet to the music of Ludwig Minkus. The Hong Kong Ballet’s director, Madeleine Onne, who attended the Warsaw premiere of Don Quixote, asked Krzysztof Pastor to “lend” her the Polish soloist to take part in several performances.

Don Quixote premiered in Hong Kong on August 22 at the Grand Theatre. The production is an international collaboration. The choreography is by world ballet star Nina Ananiashvili, current director of the Georgian National Ballet in Tbilisi. The Warsaw stage design and costumes for the ballet were reproduced according to the designs commissioned from German artist Thomas Mika. In performances after the premiere, the Hong Kong Ballet’s dancers were joined by principal soloists of the Dutch National Ballet as guest performers: Anna Tsygankova as Kitri and Matthew Golding as Basilio.

Pictured: Bartosz Anczykowski as Sancho Panza in the Warsaw production of Don Quixote