Robert Bondara will debut his new choreography Didi & Gogo set to Paweł Szymański’s Singletrack created for Washington’s Company | E on 16 March 2016 at the Terrace Theatre, the Kennedy Center. The premiere, originally planned for 22 January, has been postponed due to a snowstorm in Washington. 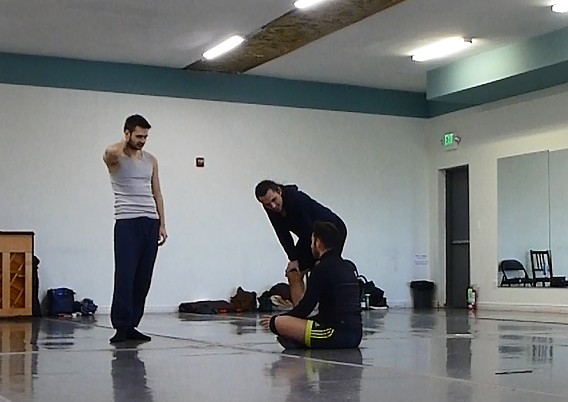 Our choreographer has been invited by Paul Gordon Emerson, artistic director of Company | E, to contribute to Generations: Poland, an evening showcasing representatives of four generations of Poland’s composers and choreographers. The audience of the Terrace Theatre will be treated to Dirge by Pola Nireńska (1910–1992) set to music by Ernest Bloch, Who let the dogs out by Lidia Woś to music by Marcin Brycki, the new duet by Robert Bondara set to a piano piece by Paweł Szymański, and Air – a collaboration of Mr Emerson and five members of his company that uses the second movement of Henryk Mikołaj Górecki’s Symphony No. 3 (Symphony of Sorrowful Songs) arranged by Gavin Stewart. Polish Embassy in Washington is a patron of the premiere.

Bondara’s Didi & Gogo deals with mutual attraction and rejection, fear of solitude and irresistable need to coexist, two strong characters clashing. Among the multiple inspirations that fueled the piece, apart from Szymański’s music, were personal experiences of the two dancers performing the choreography: Robert J. Priore and Gavin Stewart. The choroegrapher has also revealed that he meant to evoke the atmosphere of Beckett’s Waiting for Godot and draw on its two protagonists, Vladimir and Estragon, also known as Didi and Gogo. (pch)