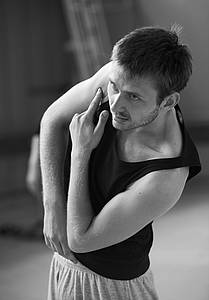 Robert Bondara has staged two new choreographies, this time with the Wrocław Opera Ballet. A ballet evening of his design presenting Igor Stravinsky’s The Firebird and Béla Bartók’s The Miraculous Mandarin premiered in Wrocław on 11 September. The stage designer is Julia Skrzynecka, projections were prepared by Ewa Krasucka, and the lighting was designed by Łukasz Różewicz.

The young choreographer from the Polish National Ballet already has many projects to his credit. He debuted on our small stage with the one-act ballet When You End and I Begin… and several other miniatures during our choreography workshops, and then went on to stage large ballet productions: The Captive Mind at the Opera Nova in Bydgoszcz, Persona on our small stage, and Čiurlionis at the Lithuanian National Opera and Ballet Theatre in Vilnius. With the Polish National Ballet he is currently working on a new choreography called Nevermore…?. The world premiere is planned as part of 1914, a ballet evening scheduled for November.