Charity gala: МИ З ВАМИ / We Are With You!

Charity gala: МИ З ВАМИ / We Are With You!

The Polish National Opera and Nasza Fundacja are holding a charity gala for Ukraine on 14 April 2022. All proceeds will be donated to relief efforts for Ukrainian children. 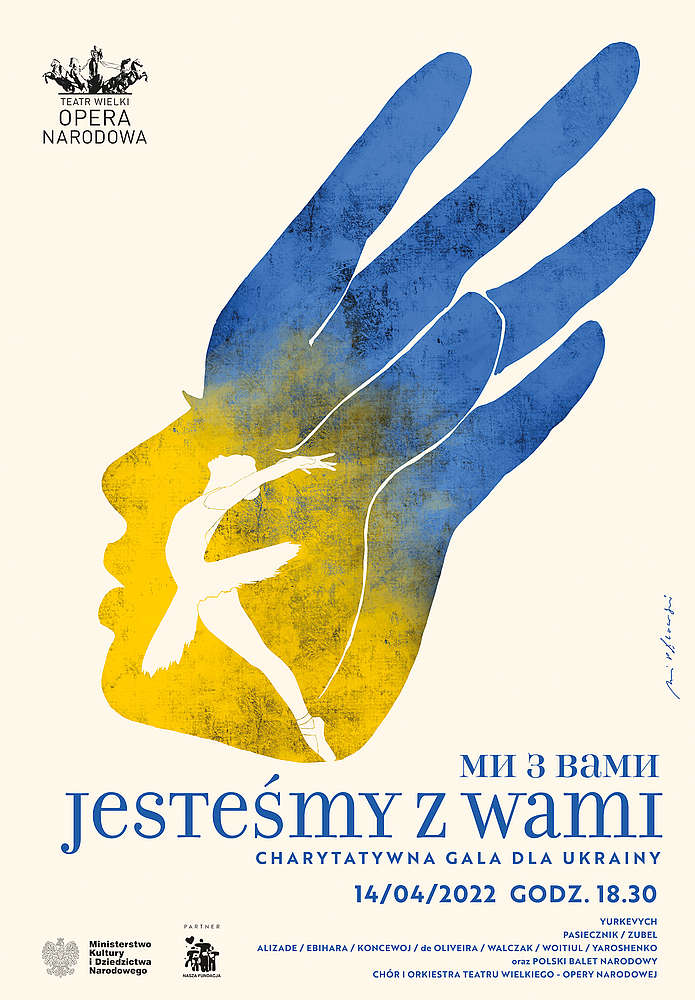 Artists of the Warsaw opera house unite with Ukraine using the language of opera and ballet, music and theatre.

Music is a great force. We want to express our respect for the cultural heritage of Ukraine and support the country in the face of Russian aggression. The charity gala МИ З ВАМИ / We Are With You! will have two parts: one centring on opera, the other on ballet.

It will open with a selection of music by three excellent contemporary Ukrainian composers who regularly work with the Polish artistic circles: Lubawa Sydorenko, Zoltan Alamashi, and Aleksandr Shymko. The programme includes vocal and instrumental pieces closely connected with Polish culture, written to words of Czesław Miłosz and Halina Poświatowska. They will be performed by excellent sopranos Olga Pasichnyk and Agata Zubel, and pianist Lech Napierała. Andriy Yurkevych will conduct the Orchestra of the Polish National Opera.

By giving a platform to the greatest examples of 21st-century Ukrainian music, we wish to underscore the merits and beauty of our neighbours’ culture, expressing our respect for their cultural heritage and support for their struggle. Music is a great force. We hope that our Ukrainian friends will feel the closeness of Polish hearts and that this becomes a harbinger of peace and prosperous future for the Ukrainian nation.

The second part of the gala will be a collage of choreographies from the repertoire of the Polish National Ballet. The selection was made with the goal of provoking reflection on the tragic situation of the Ukrainian nation in the face of the aggressor’s bestial invasion.

The ballet showcase will begin with fragments of Krzyszof Pastor’s choreography Kurt Weill with recorded music by the eponymous composer, who was himself  forced to flee growing Nazism in Germany. In this context, his Gebet can be interpreted as a prayer of a man fearful of the peril surrounding him. The dance duet to his music for the play Silbersee evokes the empathic courage of a soldier who risks his own life to help an oppressed man flee through the Silver Lake. The song Wie lange noch? is an emanation of devastating separation caused by war and uncertainty about its length. Such heartbreaking goodbyes are a daily reality in Ukraine. It is also poignant how prophetic Anna Hop’s Exodus to music by Wojciech Kilar turned out to be in its eloquent exploration of mass departure in the face of deadly danger. At the same time, a stirring sequence from Krzysztof Pastor’s ballet And The Rain Will Pass… to music by Henryk Mikołaj Górecki, despite being inspired by Andrzej Wajda’s film Kanał (Sewer) about the Warsaw Uprising of 1944, can now be seen as a painful reminder of a universal story.

Ukraine is defending itself, suffering, appealing to the civilised world for help. Will it arrive in time and be sufficient?

All the artists, including the designer of the poster, Andrzej Pągowski, have volunteered their free time to prepare and perform in the show, giving up any compensation for it.

All proceeds from the event will be donated to relief efforts for Ukrainian children, those fleeing their motherland with their mothers, orphans and children in children’s homes. The charity gala is held in partnership with Nasza Fundacja (Our Foundation), a non-profit that had been actively and comprehensively looking after children from children’s homes for years.

Chorus and Orchestra of the Polish National Opera