With Christmas just around the corner, we have put together an online programme to brighten your festive season. Watch on vod.teatrwielki.pl for free. 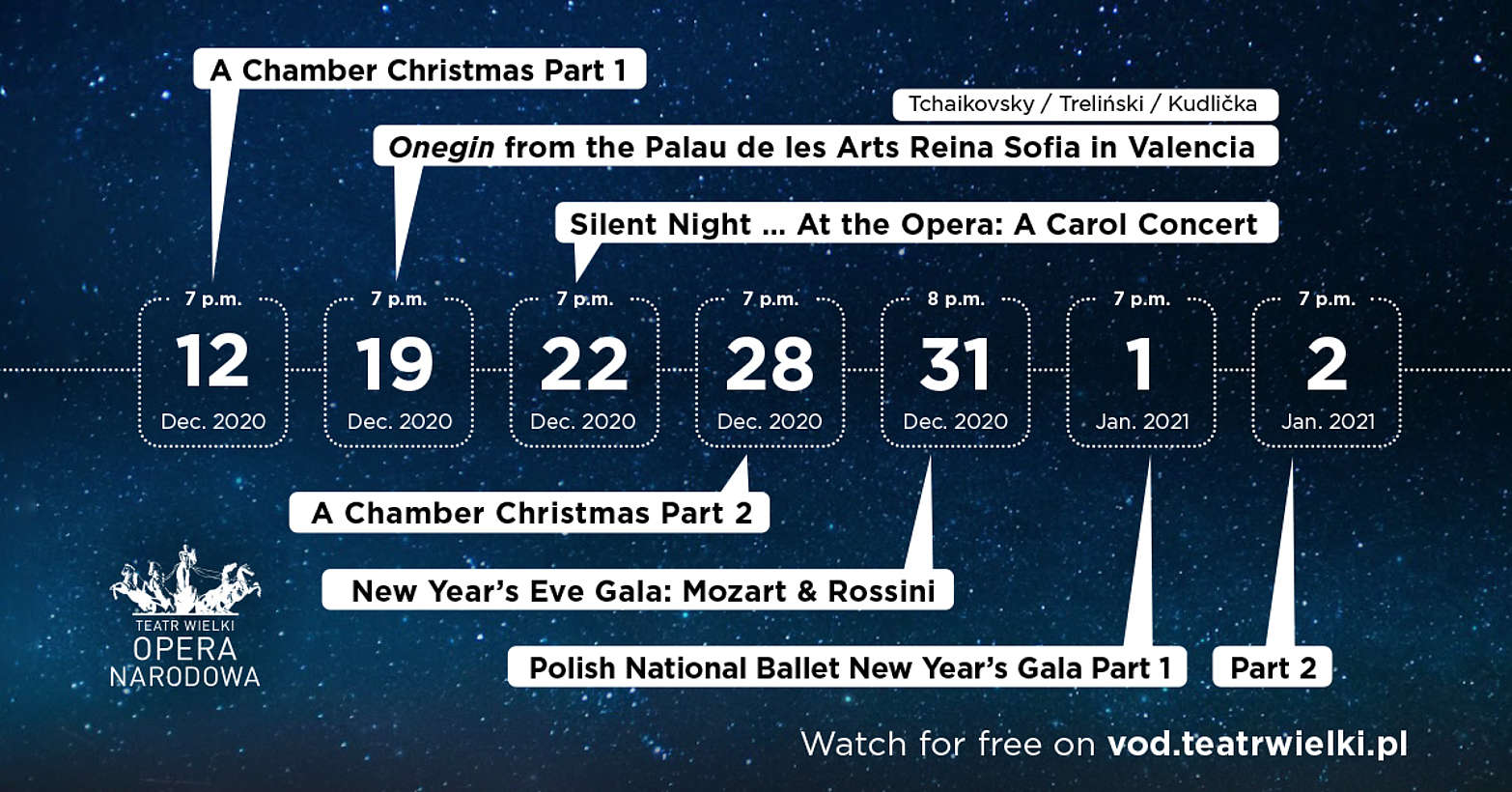 12 Dec., 7 p.m. – A Chamber Christmas Part 1 available on vod.teatrwielki.pl until 6 January
This Christmas we are going to be celebrating in smaller groups not only because of the health restrictions. A Chamber Christmas is a concert featuring our orchestra musicians performing special music arrangements for chamber ensembles, including Silent Night for trumpets and other pieces for different sections of the orchestra. The programme includes: Arcangello Corelli’s Sonata a tre: Grave – Allegro, Hornpipe from George Frideric Handel’s Water Music, and Dimitri Shostakovich’s Waltz.

19 Dec., 7 p.m. – Onegin available until 21 December
Definitely an iconic piece in Mariusz Treliński’s career, this production of Pyotr Tchaikovsky’s brilliant opera has been part of our opera house’s repertoire for 18 years now and continues to strike with the power of its symbolism, dramatic quality, and poignancy. The performance to be shown on vod.teatrwielki.pl was recorded in 2011 at the Palau de les Arts Reina Sofia in Valencia, leading centre for culture and the arts as well as an architectural gem which has welcomed the greatest opera productions ever made. Excellent Polish baritone Artur Ruciński sings the title role.

22 Dec. 7 p.m. – Silent Night … At the Opera: A Carol Concert available on vod.teatrwielki.pl until 6 January
This Christmas many will experience a sense of isolation. Let us stop for a moment, listen to the silence, and find in the troubling reality the good, the wise, and the important. Let us try and make use of the time we were unexpectedly granted to get to know ourselves and or loved ones better. Let us remember the spirit of Christmas and look hopefully to the future.

The excellent Polish artists and regular guests of the Polish National Opera to perform the concert have not had a chance to practice their profession for the past few months. They have also been unable to act on their greatest passion: make live music onstage. Thanks to the power of the Internet, they will now perform especially for you. Singers: Dariusz Machej, Tomasz Raff, Aleksandra Orłowska, Magdalena Stefaniak, Elżbieta Wróblewska, Zuzanna Nalewajek, Emil Ławecki, Tomasz Rak, Mateusz Zajdel, Magdalena Idzik, Anna Bernacka, Piotr Czekała, Anna Simińska, Jasin Rammal-Rykała. Piano: Marek Bracha. Concert preparation: Piotr Staniszewski and Barbara Wiśniewska.

31 Dec., 8 p.m. – New Year’s Eve Gala: Mozart & Rossini available on vod.teatrwielki.pl until 6 January
This New Year’s Eva Gala will focus on the music of two phenomenal composers and opera geniuses: Wolfgang Amadeusz Mozart and Gioacchino Rossini. Often compared with each other, they represented two different styles and aesthetic approaches. Their works are invariably among the top most popular operas the world over. The gala will transport you to the sunny Andalusia, where you will follow the adventures of Figaro, Rosina, and Count Almaviva depicted in Rossini’s The Barber of Seville and continued in Mozart’s The Marriage of Figaro. The concert will also feature fragments of Mozart’s Cosi fan tutte, Don Giovanni or Idomeneo, re di Creta, as well as Rossini’s L’italiana in Algeri, Mosè in Egitto, and Il signor Bruschino.

Performing the famous arias and ensembles are Polish star soprano, Olga Pasichnyk, as well as baritones Andrzej Filończyk and Tomasz Kumięga, two former members of the Opera Academy with international triumphs under their belts. Music director Maestro Patrick Fournillier conducts the Orchestra and Chorus of the Polish National Opera.

The gala’s lineup includes principal dancers and other artists of Polish National Ballet. As for the classical repertoire, Yuka Ebihara and Vladimir Yaroshenko will perform the spectacular grand pas of Kitri and Basilio from Don Quixote accompanied by Elisabetta Formento and Palina Rusetskaya. Together with Chinara Alizade Dawid Trzensimiech will recreate the sophisticated pas de deux of Princess Aurora and Prince Désiré from The Sleeping Beauty, then will be joined by Yurika Kitano in a cheerful, if little known in Poland, duet from Bournonville’s The Flower Festival in Genzano. Maksim Woitiul and Mai Kageyama will present a pas de deux from The Nutcracker, while Vladimir Yaroshenko and Chinara Alizade will return to the stage with the romantic pas de deux of Nikiya and Solor from La Bayadère. You will also see Pas d’Esclave from Le Corsaire danced by Mai Kageyama and Ryota Kitai as well as the Odalisque Pas de Trois (Aoi Choji, Palina Rusetskaya, Yume Okano). Last but not the least, Rinaldo Venuti and Melissa Abel will give you their rendition of the pas de deux of Bluebird and Princess Florine from The Sleeping Beauty.

The gala will also give you a taste of the contemporary ballet repertoire choreographed by the PNB director: the unforgettable duet from Krzysztof Pastor’s Tristan and Isolde interpreted by Yuka Ebihara and Paweł Koncewoj, two ravishing fragments from Kurt Weill performed by Maksim Woitiul (Gebet), Rosa Pierro and Rinaldo Venuti (Wie lange noch?), Preludium and Toccata from a new ballet being developed by Mr Pastor’s to Wojciech Kilar’s Piano Concerto, and the impressive finale of his hit ballet Moving Rooms with music by Schnittke and Górecki. Marta Kluczyńska conducts the Orchestra of the Polish National Opera.