Treat your loved ones to tickets to productions that have enchanted the world! Buy tickets to Mariusz Treliński’s Iolanta and The Bluebeard’s Castle and Salome 30% off from 7 to 20 December! 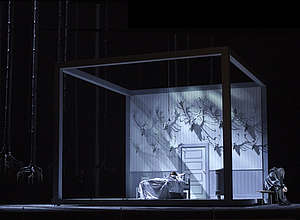 ‘Mariusz Treliński, the Polish director whose first Met production this is, has found intricate devices for framing the operas as parallel worlds that might well be the same world seen under different aspects. He has aimed to flavor the fairy-tale timelessness of the libretto (Iolanta is ostensibly set in a fanciful version of fifteenth-century France, Bluebeard’s Castle in what, according to its opening recitation, could be the mind’s interior) with visual motifs from 1940s Hollywood. …’ 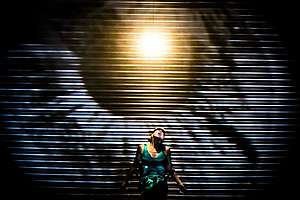 ‘Treliński overlays certain visual motifs across both operas – white flowers, blue dresses, necklesses, uprooted trees that rise and descend – not to mention the baronial wall display of antlered stag heads that recurs in both, related presumably to the most disconcerting touch of all: the giant deer that emerges at the side of the stage at the beginning Iolanta. This hologram Bambi collapses into nothingness, to be followed by a succession of video-projected deer racing across the field of vision through the opening bars of the music, a drifting prelude that seems designed to express that cloud of unshaped yearnings into which the princess is just waking. Hovering and unassertive, it reaches for something like the sound of her blindness.’ 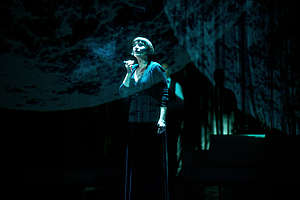 ‘The new production has been directed with such a flair, that it can be called authorial. Had the director also altered or deleted a thing of two from the libretto, nobody would hesitate to do so, I’m sure. The story of Salome is reinterpreted in a novel, unorthodox way, which goes beyond its mere relocation to our times. The costume and set design are not the only elements that witness to the director’s aim of making the rendition more contemporary. What should be noticed above all how deeply he has reflected on the story itself, the character’s psyche, giving it very real and contemporary significance.”