The Polish National Ballet has accepted an invitation to perform at the 22nd Bydgoszcz Opera Festival. 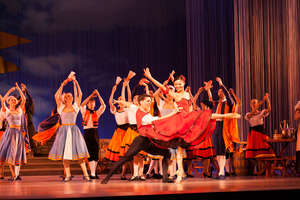 On 3 May 2015 our company will present the production of Don Quixote by Alexei Fadeyechev at Opera Nova in Bydgoszcz. This is not the PNB’s first visit to the city. Three years ago the festival’s audience was treated to our bill of three choreographic versions of Stavinsky’s The Rite of Spring: by Vaslav Nijinsky, Emanuel Gat, and Maurice Béjart.

This time, Maciej Figas, Opera Nova’s director, has asked us to present a classical ballet piece, and so we have suggested Alexei Fadeyechev’s brightly coloured and vibrant production of Don Quixote drawing on the traditional choreography by Marius Petipa and Alexander Gorsky, and set to music by Ludwig Minkus.

Starring in our performance of Don Quixote in Bydgoszcz will be the first soloists Yuka Ebihara as Kitri and Paweł Koncewoj as Basilio. The accompaniment will be provided by the Orchestra of the Teatr Wielki – Polish National Opera under Marta Kluczyńska. (pch)

In the photo: Yuka Ebihara and Paweł Koncewoj in Don Quixote, photo by Ewa Krasucka