Following an invitation from the Lithuanian National Opera and Ballet Theatre, on 4 and 5 December 2013 the Polish National Ballet is performing in Vilnius. 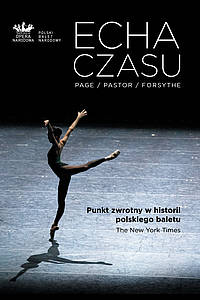 Following an invitation from the Lithuanian National Opera and Ballet Theatre, on 4 and 5 December 2013 the Polish National Ballet is performing in Vilnius. This is a return visit after the recent appearance of the Vilnius ballet company at the Teatr Wielki – Polish National Opera presenting Anželika Cholina’s Barbara Radziwiłłówna and Robert Bondara’s Čiurlionis. The mutual presentation of productions in Warsaw and Vilnius is a new element in the traditional collaboration between the two countries’ national opera and ballet theatres, strengthened in recent years by Krzysztof Pastor being the artistic director of both ballet companies. The importance of this year’s cultural exchange between our theatres is enhanced by the honorary patronage of the presidents of Poland and Lithuania, Bronisław Komorowski and Dalia Grybauskaitė.

In Vilnius the Polish National Ballet will perform three contemporary choreographies in a single evening called Echoes of Time, a production that is one of the company’s greatest repertoire achievements of recent years. Responding to our Lithuanian hosts’ interest in the latest ballet output, we bring them a show that reflects contemporary choreographic creativity in Western ballet and the huge technical capabilities of today’s dancers. This ballet evening features our world premiere of Century Rolls by British choreographer Ashley Page to the music of John Adams, the expressive Moving Rooms by our own Krzysztof Pastor with the music of Alfred Schnittke and Henryk Mikołaj Górecki, and the famous Artifact Suite by great American choreographer William Forsythe.