Our dancer Joanna Drabik has been invited by the Polish Cultural Institute in London to present the final dance from the ballet The Rite of Spring by Vaslav Nijinsky, at the Polish embassy in London. 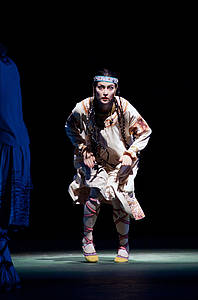 The ballet, in an invaluable choreographic reconstruction from 1987, was produced in Warsaw three years ago by US artist Millicent Hodson and includes stage design by British art historian Kenneth Archer who re-created Nicholas Roerich’s original decorations and costumes from 1913.

Joanna Drabik’s London performance on 24 September 2014 accompanies the book launch of The Lost Rite by Hodson and Archer, featuring photographs that British artist Shira Klasmer took at the Warsaw performances of Nijinsky’s piece. This richly illustrated book presents a series of 400 consecutive images from the Polish National Ballet’s performance together with excerpts from original press reviews and reminiscences about the revolutionary choreography. The book pays homage to the great Polish choreographer on the 100th anniversary of the Paris world premiere of Vaslav Nijinsky’s The Rite of Spring set to the brilliant music of Igor Stravinsky.

Apart from our dancer’s performance, the gala at the Polish Embassy will include a screening of Lost in Spring, a documentary by Ineta Muzikevičiūtė and Patryk Zabielski shot at our theatre and presenting Millicent Hodson and her reconstruction of Nijinsky’s choreography. Following a decision from Director Waldemar Dąbrowski, the Teatr Wielki – Polish National Opera is one of the partners of the book launch; Hodson and Archer’s book will soon be available for purchase at our theatre. The London launch is supported by other organizations as well, including the John Neumeier Foundation in Hamburg and the Joffrey Ballet in Chicago.

Pictured: Joanna Drabik as the Chosen One in our production of The Rite of Spring in Vaslav Nijinsky’s choreography reconstructed by Millicent Hodson.
Photo by Ewa Krasucka