The annual Prize of the Minister of Culture and National Heritage 2014 in the dance category was awarded to Krzysztof Pastor. 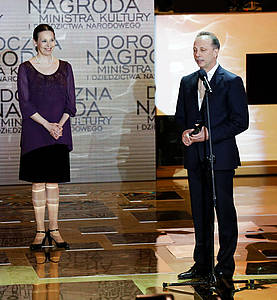 The award presentation gala with Minister Bogdan Zdrojewski took place on 29 May at the Stanislavian Theatre in Royal Łazienki Park, where Krzysztof Pastor received the statuette from the minister and outstanding Polish ex-ballerina Ewa Głowacka.

Krzysztof Pastor returned to Poland in 2009 after 26 years of a busy international career as a dancer and choreographer. He was appointed director of the Teatr Wielki – Polish National Opera’s ballet company and then helped elevate it to the rank of the Polish National Ballet. Over the past five years he has largely replaced the company’s members, significantly expanded its artistic potential and developed a rich and ambitious ballet repertoire at the Teatr Wielki. As a choreographer he has produced his original ballets on our stage: Tristan, Kurt Weill, In Light and Shadow, And the Rain Will Pass…, Moving Rooms, Romeo and Juliet, Adagio & Scherzo. He has also opened a space for his dancers’ annual choreographic debuts. The company he heads has had many successes at the Teatr Wielki and during guest performances in Poland and abroad. Productions by the Polish National Ballet receive excellent reviews from critics in London, Paris and New York.

We see this year’s Prize of the Minister of Culture and National Heritage for Krzysztof Pastor as a mark of recognition for his fruitful five-year artistic effort and extend our congratulations to the director of the Polish National Ballet.