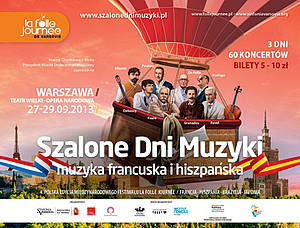 The focus of the Wild Days of Music Festival 2013 is on French and Spanish composers: Albeniz, Debussy, De Falla, Fauré, Granados, Poulenc, Ravel, Rodrigo. The idea of the Wild Days of Music is to overcome people’s prejudice against classical music by encouraging and facilitating participation in concerts while also maintaining the highest possible standard of performance of this music. Short concerts held from morning till night at several venues simultaneously, affordable tickets, and a unique atmosphere make the Wild Days of Music a meeting with music to which everyone is invited – no exceptions.

Though there is still some time before La Folle Journée kicks off in Warsaw, the Teatr Wielki – Polish National Opera and the Sinfonia Varsovia Orchestra already invite everyone to reserve the last weekend of September (27-29 September 2013) in their calendars so that they can fully enjoy the festival’s promised wildness. As before, tickets to the concerts will be on sale at the theatre’s box office and via our website as per September 1st.

La Folle Journée / Wild Days of Music is an international festival in existence since 1995; it was devised and founded by René Martin – creator of festivals and organizer of classical music concerts all over the world, founder of the Centre de Réalisation et d’Études Artistiques (CRÉA) in Nantes. La Folle Journée / Wild Days of Music has been a great success for many years, held in France, through Spain and Japan, to Brazil. In all the countries, it enjoys a strong position in local cultural life and is very popular. This is the fourth time the festival is being held at the Polish National Opera. The previous editions, i.e. Chopin Open (2010), Les Titans (2011), and Russia (2012) were received with great audience interest and enthusiasm. The brilliant output of the greatest Russian composers drew a record number of 36,660 listeners. The three days and 60 concerts featured 950 performers from seven countries: France, Georgia, Lebanon, Russia, Uzbekistan, Italy, and Poland. The organizers of the Wild Days of Music in Poland are the Sinfonia Varsovia Orchestra, the Music Gardens Foundation, and the Teatr Wielki – Polish National Opera.