The Lithuanian National Opera and Ballet Theatre will celebrate Krzysztof Pastor’s 60th birthday with a showcase of his choreographies and a gala featuring dancers of the Polish National Ballet and a string of international ballet stars led by Svetlana Zakharova. 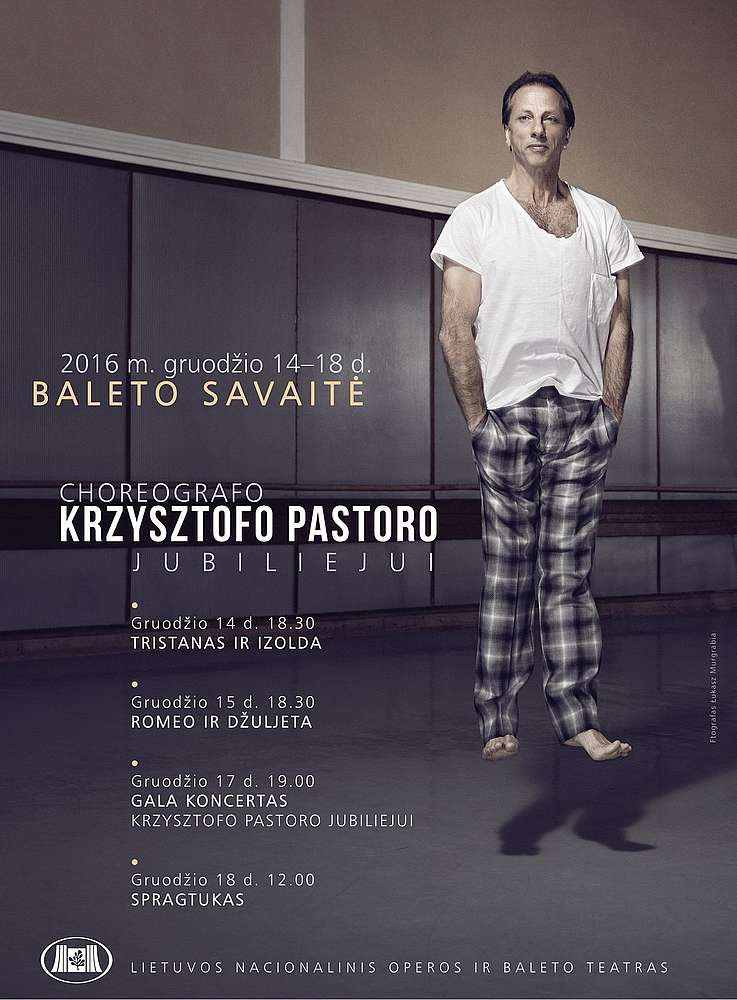 Here in Warsaw we have celebrated Krzysztof Pastor’s jubilee with the premiere of the triple bill Chopiniana / Bolero / Chroma. Soon we will also release a richly illustrated book documenting the artistic career of the director of the Polish National Ballet. Pastor, who has also been the artistic director of the Lithuanian National Ballet for the past five years, will also be honoured in Vilniu. From 14 to 18 December the Lithuanian National Opera and Ballet Theatre will hold a Ballet Week dedicated to the choreographer in conjunction with an exhibition celebrating the artist’s achievements. The festival’s patron is Raminta Kuprevičienė; its main sponsor is Orlen Lietuva.

The audience in Vilnius will be treated to gala performances of three full-lenth ballets Pastor staged with the city’s ballet company: Tristan and Isolde (14 December), Romeo and Juliet (15 Decemebr) and The Nutcracker (18 December). Starring in the lead roles will be soloists of the Lithuanian National Ballet: Inga Cibulskytė, Kristina Gudžiūnaitė, Olesia Shaytanova, Jeronimas Krivickas and Genadij Žukovskij.

The festival will conclude with a Gala Concert on 17 December, Krzysztof Pastor’s actual birthday. The event will gather such ballet stars as Svetlana Zakharova and Michail Lobuchin of the Bolshoi; Marianela Núñez and Vadim Muntagirov of the Royal Ballet, or Igone de Jong and Daniel Camargo of the Dutch National Ballet. The Polish National Ballet’s Chinara Alizade, Yuka Ebihara, Mai Kageyama, Emilia Stachurska, Aneta Zbrzeźniak, Robin Kent, Paweł Koncewoj, Kristóf Szabó, Maksim Woitiul and Vladimir Yaroshenko will perform Krzysztof Pator’s Adagio set to Schubert’s music and Moving Rooms set to music by Schittke and Górecki. What is more, Yuka Ebihara and Dawid Trzensimiech will present a pas de deux from August Bournonville’s The Flower Festival in Genzano. The gala will also feature appearances by soloists of the Lithuanian National Ballet. To crown it all, the Vilnius-based company will perform Krzysztof Pastor’s Bolero. (pch)