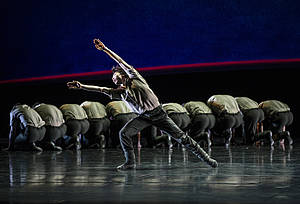 The programme combines great world choreography classics – works by Kurt Jooss and Jiří Kylián – with the latest ballet from our own Robert Bondara. The new show will have six performances: on 15, 16, 18 and 30 November, and on 2 and 3 December 2014.

The evening opens with Robert Bondara’s new anti-war ballet Nevermore…? designed to music by two contemporary Polish composers, Prasqual and Paweł Szymański, and to a piece by Steve Reich. The choreographer contemplates the causes, nature and effects of armed conflicts from the perspective of individuals, who are always left helpless.

Bohuslav Martinů composed his Field Mass cantata after the German invasion of Czechoslovakia in 1939. Essentially, though, it invokes the painful memories of World War I. In 1980 world-famous Czech choreographer Jiří Kylián based a poignant male ballet on this music, dedicating it to the memory of the young soldiers of all times who keep getting killed on the front lines of pointless wars. Jiří Kylián now reprises his extraordinary work with the Polish National Ballet’s dancers and the Orchestra of the Teatr Wielki – Polish National Opera.

The performance concludes with the legendary ballet The Green Table to piano music by Friedrich A. Cohen, designed by one of the greatest artists of European expressionism, famous German choreographer Kurt Jooss. The ballet is maintained in the mood of a keen anti-war political satire. Following its world premiere in Paris in 1932, to avoid the threat of persecution Kurt Jooss had to emigrate from Nazi Germany. With time, The Green Table grew to become a timeless warning against war, and as such had countless revivals in many countries, gaining recognition as a masterpiece of 20th-century art. Kurt Jooss’ original choreography is now brought to our theatre by American ballet mistress Jeanette Vondersaar.

The Polish National Ballet’s premiere opens our 6th Days of Dance festival (15-24 November). This year’s programme also includes a Poznań production of Cinderella with choreography by Paul Chalmer, a new version of The Brothers Karamazov from Boris Eifman, called The Other Side of Sin and performed by his St. Petersburg Ballet Theatre, a small-scale Polish-Israeli production called Engagé&Rust interpreted by Elwira Piorun and Ido Tadmor, and our own Obsessions with choreographies by Krzysztof Pastor and Emil Wesołowski.