For the 100th anniversary of the world premiere in Paris of Igor Stravinsky’s The Rite of Spring choreographed by Vaslav Nijinsky, the Teatr Wielki has prepared a special exhibition by the young painter Róża Puzynowska. 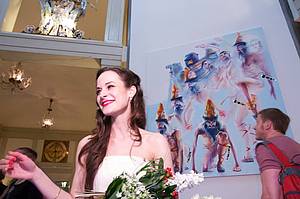 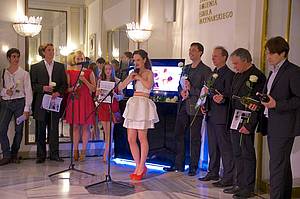 For the 100th anniversary of the world premiere in Paris of Igor Stravinsky’s The Rite of Springchoreographed by Vaslav Nijinsky, the Teatr Wielki has prepared a special exhibition by the young painter Róża Puzynowska, who was inspired by the way the ballet’s reconstruction and staging by Millicent Hodson and Kenneth Archer was interpreted by the Polish National Ballet. Her cycle of paintings comprises 14 large-sized pictures. They portray the Polish National Ballet’s dancers in poses, costumes, and make-up from Nijinsky’sThe Rite of Spring and are on display in the box office lobby and lower reception rooms of the Teatr Wielki until 15 July 2013.

The official opening on 27 May was very well attended. The host was the PNB’s director Krzysztof Pastor, who presented the painter and the circumstances surrounding the exhibition. Invited guests included the painter’s professor, Stanisław Baj from the Academy of Fine Arts as well as the dancers of the Polish National Ballet who appear in Róża Puzynowska’s pictures in their roles from The Rite of Spring. The artist thanked them all by presenting them with white roses. The event included a special attraction: Margarita Simonova performed the final dance of the Chosen One from Nijinsky’s ballet in the foyer. The exhibition is accompanied by an original catalogue in the form of a poster reproducing the paintings and featuring remarks from the painter and others she invited to contribute.

Above: pictures from the exhibition’s opening