Gianni Quaranta has completed set and costume designs for Casanova in Warsaw, Krzysztof Pastor’s new ballet to premiere in May 2015. 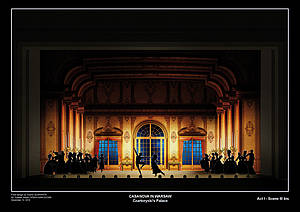 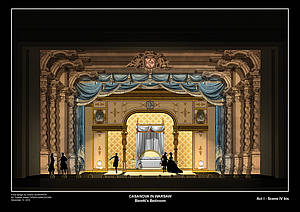 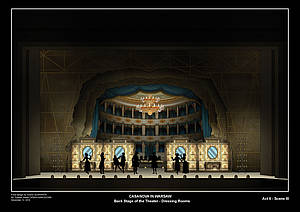 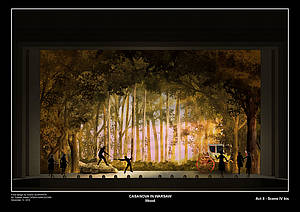 Giacomo Casanova spent nine months in Poland in 1765-1766, moving in court and theatrical circles. He witnessed the first season of the public theatre at Operalnia Saska (Saxon Opera House). He showered his attentions upon the rival Italian ballerinas Anna Binetti, Caterina Gattai and Teresa Casacci. He applauded the performances of Charles Le Picq who was dubbed the European ballet scene’s Apollo of Dance. He became involved in the ballerinas’ scheming, letting himself be drawn into a conflict and duel with Count Ksawery Branicki. Hence our interest in the Warsaw episode of his legendary diaries.

Works on a Polish ballet about Casanova have been lasting for over a year. The libretto’s author is Paweł Chynowski, while the choreography is being designed by Krzysztof Pastor. The pair have tied their ideas to the music of Wolfgang Amadeus Mozart, whose life and work ran parallel to the famous Venetian’s adventures. It is alleged that the two met during preparations for the world premiere of Don Giovanni and that Casanova even had a say in the final version of the Mozart masterpiece’s libretto. The musical concept for the ballet was thus based on selected instrumental and vocal pieces composed by Mozart, in a process that also involved the production’s music director Jakub Chrenowicz.

The idea for the ballet Casanova in Warsaw had emerged in the context of next year’s celebration of 250 years of Polish public theatre, which coincides with the anniversary of Poland’s first royal ballet company. On the initiative of the Warsaw opera house’s director, Waldemar Dąbrowski, the stage designer for this production will be a leading Italian artist Gianni Quaranta (winner of an Academy Award for A Room with a View and a César for Farinelli, among other awards), whose great theatre and film output was created in the course of working with artists such as Zeffirelli, Bertolucci, Ponnelle, Menotti, Ivory, Corbiau, Lavaudant, Bolognini and Ronconi. He himself proposed famous cinematographer Daniele Nannuzzi, with whom he has worked ever since Zeffirelli’s memorable film Jesus of Nazareth, as the production’s lighting designer.

Consultations with Gianni Quaranta lasted for some time. The designer was provided with detailed documentation of the project and inspected the theatre’s technical capabilities in person. He also had a few working meetings with the choreographer and the librettist. In mid-December 2014 he delivered the designs for the sets and costumes, which are now in production. The ballet’s world premiere is planned for May 2015.

Pictured: selected set designs by Gianni Quaranta for the ballet Casanova in Warsaw