A master of his craft, a dedicated professional, one of Poland’s first lighting directors, a legend. Stanisław Zięba died on 20 July 2020 after a severe illness. 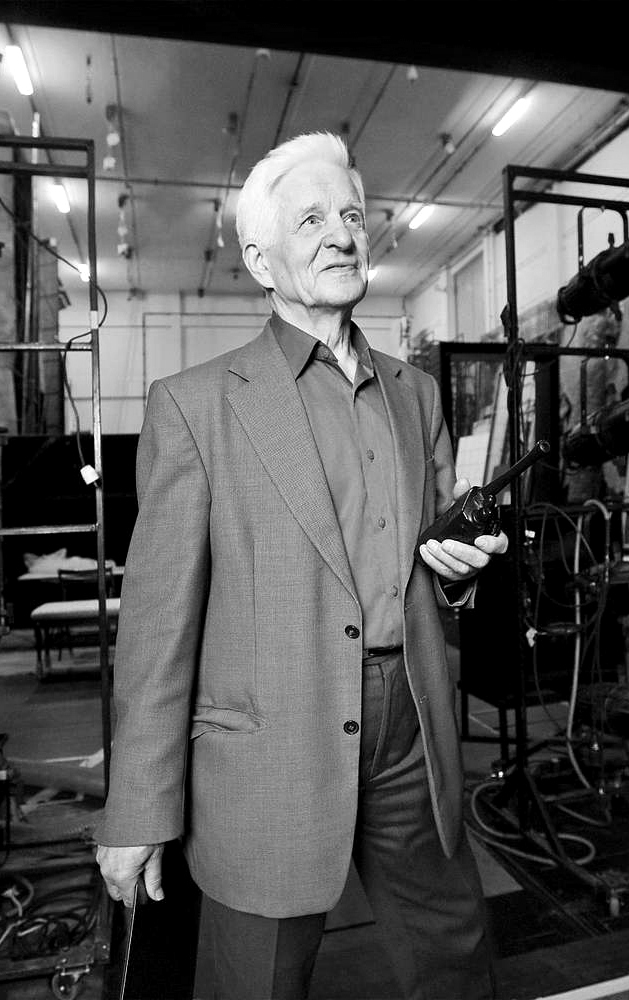 He came to work at the Warsaw Opera in 1954, when the theatre was led by Walerian Bierdiajew; he was seventeen and a student of an electrical vocational school. Stanisław Zięba joined the Warsaw Opera in 1954, when it was led by Valerian Bierdiajew. He was seventeen at the time and still as a student of an electrical school. The first production he worked on was Tchaikovsky’s Iolanta in 1955. He was involved as a lighting technician with each and every one of the nearly 500 openings that have taken place since that point in time at the Warsaw Opera in the Roma building in Nowogrodzka St. and the Teatr Wielki once it was reconstructed after wartime destruction.

He devised and implemented lighting designs for dozens of opera and ballet performances. After the great success of Mariusz Treliński’s production of Madama Butterfly, in which lighting played a significant role, the director asked Mr Zięba to lit the production for its staging at the Mariinsky Theatre (2005).

The artist has also developed lighting designs for outdoor events, such as the performance of Verdi’s Requiem by the Warsaw Philharmonic Orchestra and soloists of the Teatr Wielki – Polish National Opera to mark the 40th anniversary of the outbreak of World War II on 1 September 1979 in Castle Square in Warsaw. He also co-authored a light and music show marking the anniversary of the outbreak of the Warsaw Rising on 1 August 1979 in Teatralny Square, Warsaw. He lit the Soldiers’ Song Festival in Kołobrzeg, Poland; the Shakespeare Summer in Zamość, Poland (together with Jan Machulski); and the Jarocin Rock Music Festival, Poland. He headed the lighting unit of the Polish National Opera up until his death.

This is how Waldemar Dąbrowski, general manager of the Polish National Opera, remembers Stanisław Zięba:

He embodied all the qualities shared by truly creative people; his ethics could serve as a model for us all; despite the passage of time, he remained active and searching. When I think of the noble condition of the man of the theatre, I think of Stanisław Zięba.

We did not know each other through work. I met Staszek when I was studying at the Warsaw University of Technology and managing the Riviera Remont student club. An affinity developed into a close friendship which survived different trials and made me respect him more with each passing year.

He was a beautiful person – a theatre technician, lighting specialist, as well as an artist who was one of the first to co-create the artistic reality on stage. Today, lighting designers have an equal standing to stage directors, conductors, and set designers. This was not so obvious at the time when Staszek was beginning his career.

I have always felt, no – I knew, that he was a bone fide member of both the technical and the creative teams. It did not matter if he was listed in the credits or involved in the production as a member of the theatre’s staff. He fully identified with every new project.

He was a man of a warm yet discrete smile, open to all, including young people who were just staring out at the Teatr Wielki. He was always at the ready, eager to get involved in the theatre’s life when we needed wise advice or concrete action.

It seemed to me that he filled the whole theatre with his presence: the rehearsal studios and the stages. He brought the two worlds together and – more importantly – united subsequent generations of the theater’s leaders heading the administrative, technical and artistic teams. For me, as the general manager, he always gave me moral and professional support. He was a beautiful human being.

a great figure of the Polish National Opera

after a severe illness.

He started his theatre adventure back at the Warsaw Opera.

He had worked at the Teatr Wielki since the theatre opened following its post-war reconstruction in 1965.

He was involved in the staging of almost all our opera and ballet productions.

A master of his trade and one of Poland’s first professional lightning directors, he was a highly-esteemed professional and a pillar of Polish theatre lighting design.

Dear Staszek, we bid you farewell with great sadness.

Our sympathies to the Family.