Four performances of the Bach Dances ballet evening by the Polish National Ballet have been planned for the stage of the legendary Gran Teatre del Liceu in Barcelona. 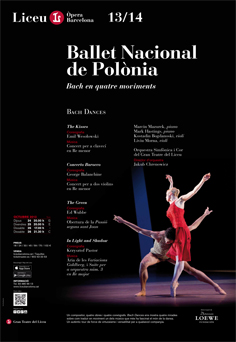 Four performances of the Bach Dances ballet evening by the Polish National Ballet have been planned for the stage of the legendary Gran Teatre del Liceu in Barcelona. The performances will take place on 24, 25 and twice on 26 October 2013. This is our ballet company’s latest visit to Spain after a series of performances of La Bayadère presented in January 2012 at the Teatro de la Maestranza in Seville.

Our Bach-based ballet evening was created in 2010. It comprises two works by Polish and two works by foreign choreographers. It opens with Emil Wesołowski’s The Kisses to the music of theHarpsichord Concerto in D Minor, the Polish choreographer’s new piece commissioned by our company. Part two includes George Balanchine’s famous Concerto Barocco, a congenial neoclassical choreography to the Concerto for Two Violins in D Minor, and The Green, a contemporary ballet by Dutch choreographer Ed Wubbe who confronts the expressiveness of male dance with the choral introduction to the St. John Passion. In the finale we have a choreographic potpourri by Krzysztof Pastor, In Light and Shadow, set to the music of the atmospheric aria from the Goldberg Variations juxtaposed here with the colourful and dynamicOrchestral Suite No. 3 in D Major, which has already been performed with success by ballet companies in Amsterdam, Stockholm, Glasgow and Edinburgh, Ankara and Hong Kong. Dance Europe wrote that it “would be a veritable tour de force of virtuosity and versatility for any dance troupe”.

In Barcelona the Polish National Ballet’s leading soloists and corps de ballet will be accompanied by the famous orchestra of the Gran Teatre del Liceu conducted by young Polish conductor Jakub Chrenowicz, who just recently took over the musical supervision of this entire ballet evening, while the piano parts will be a guest performance by our regular pianist Marcin Mazurek.