23 November 2013 is Krzysztof Penderecki’s 80th birthday. As part of the celebration, the Teatr Wielki – Polish National Opera will open its 2013/14 season with a new version of „The Devils of Loudun”. 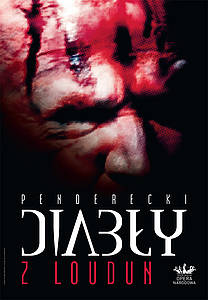 23 November 2013 is Krzysztof Penderecki’s 80th birthday. As part of the celebration, the Teatr Wielki – Polish National Opera will open its 2013/14 season with a new version of The Devils of Loudun. The composer has written a new version of the score, adding 147 pages of music text but not extending the opera by even one minute. The first performance of the opera’s new version took place on 12 February 2013 at the Royal Danish Opera in Copenhagen (Det Kongelige Teater) and has already won acclaim from critics and audiences alike. The libretto was written by the composer himself, based on Aldous Huxley’s novel The Devils of Loudun and John Whiting’s play The Devils. The director is Keith Warner, a leading British opera director, the stage design is by Boris Kudlička, Kaspar Glarner designed the costumes, and Lionel Friend will be conducting.

The opera had its world premiere on 20 June 1969 at the Staatsoper in Hamburg, directed by outstanding Polish stage director Konrad Swinarski. The conductor was Henryk Czyż, the stage design was by Lidia and Jerzy Skarżyński, and the main parts were interpreted by Tatiana Troyanos (Jeanne), Andrzej Hiolski (Father Grandier), and Bernard Ładysz (Father Barré). The Polish premiere of The Devils of Louduntook place on 8 June 1975 at the Teatr Wielki in Warsaw. This show was directed by Kazimierz Dejmek, the magnificent stage design was the work of Andrzej Majewski, and the musical director was Mieczysław Nowakowski. Both premieres – in Germany and in Poland – were enthusiastically received.

The opera describes a real event: a famous and grim trial in the small French town of Loudun. In 1634 Father Grandier was accused by Jeanne, prioress of the Ursuline convent, of bewitching the nuns and being in league with the devil.

The Polish premiere of the new version of The Devils of Loudun will take place on 2 October 2013 at the National Opera, opening a series of artistic events celebrating the great composer’s 80th birthday. Subsequent performances are planned for 4, 6 and 8 October 2013.

Poster for the production designed by Adam Żebrowski, photo: Per Morten Abrahmsen