How to turn a naturally bad-tempered gal into a meek young lady? You’ll find out on 27 November from William Shakespeare and choreographer John Cranko as the Polish National Ballet stages the popular ballet comedy. 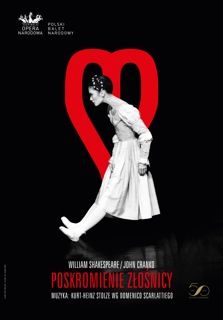 The guidelines were first laid out by William Shakespeare in the 16th century. John Cranko, one of the most outstanding choreographers of the 20th century, decided that human nature is universal, and in this particular case there isn’t a better method than the one used by Petruchio with Katherina. So, he took it upon himself to recall it and created this hilarious ballet comedy. Soon it become a canonical piece of classical ballet staged by leading international venues. This year it enteres the repertoire of the Teatr Wielki – Polish National Opera courtesy of the Polish National Ballet.

Creating the ballet in Stuttgart, Cranko worked with two muses: excellent ballet actress Marcia Haydée and her outstanding partner, dance virtuoso Richard Cragun. Consequently, he based the choreographic personas of Katherina and Petruchio on Haydée’s and Cragun’s personality and masterliness, setting a challenge for all subsequent lead dancers of the ballet. But not only them: the production has a few other comic roles that require considerable talent, namely Bianca and her suitors, Lucentio, Hortensio, and Gremio, who also have a chance to win the public’s hearts. In a word, the ballet is not only an opportunity for the soloits to showcase their dance skill but also their acting abilities.

Two ballet masters are working with the Polish National Ballet on John Cranco’s production: British choreologist Jane Bourne and the former principal dancer of the Stuttgart Ballet, long-standing performer of the role of Petruchio, Polish dancer Filip Barankiewicz. The music, composed by Kurt-Heinz Stolze on the themes of Domenico Scarlatti’s sonatas, will be performed by the Polish National Opera’s orchestra led by Hong Kong-born Canadian conductor Judith Yan. The original scenery and costumes designed by Elisabeth Dalton are now being recreated at the Teatr Wielki’s workshops  under the supervision of Steen Bjarke and Diana Eckmann. In the first series of performances, Yuka Ebihara and Mai Kageyama will take it in turns to dance the role of Katherina, while Maksim Woitiul, Vladimir Yaroshenko and Paweł Koncewoj will each perform as Pertuchio. (pch)

Photo: poster by Adam Żebrowski featuring a photo of Sue Jin Kang as Katherina courtesy of the Stuttgart Ballet