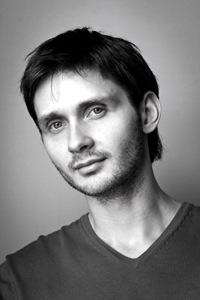 Dancer, choreographer and teacher. An artist of the Polish National Ballet. He is a graduate of the Feliks Parnell State Ballet School in Łódź and the Fryderyk Chopin University of Music in Warsaw, where he currently teaches, as well as the Warsaw School of Economics. At first he appeared at Łódź’s Musical Theatre, then moved to the Teatr Wielki in Poznań. In 2005 he joined the ballet company of the Teatr Wielki - Polish National Opera in Warsaw, today’s Polish National Ballet, and in 2008 also began working with Aleksandra Dziurosz’s Warsaw Dance Theatre.

He won 2nd prize (1st prize was awarded) and the special prize of the Witold Lutosławski Society at the Bronislava Nijinska National Choreography Competition in Warsaw (2008) and the Jan Kiepura Award for Choreographer of the Year in Poland (2011). He was a finalist of the 27th International Competition for Choreographers in Hannover (2013).

As a dancer with the Polish National Ballet (PBN) he has taken part in the company’s choreographic workshops Creations, preparing the ballets When You End and I Begin… to music by Paweł Szymański (later shown on the Warsaw opera house’s small stage), The Garden’s Gates to music by Szábolcs Esztényi, and 8m68 to music by Amon Tobin.

In 2011 he was a guest at the Opera Nova in Bydgoszcz where he staged his first full-scale ballet The Captive Mind inspired by the book by Czesław Miłosz, set to music by Philip Glass and Wojciech Kilar (Jan Kiepura Award for Choreographer of the Year). In the same year he created Persona to music by Aldona Nawrocka, Arvo Pärt and Paweł Szymański for the Polish National Ballet. The year 2013 saw the world premiere of his Čiurlionis to music by Giedrius Kuprevičius produced for the Lithuanian National Opera and Ballet Theatre in Vilnius. Both The Captive Mind and Čiurlionis were subsequently shown as guest performances at the Teatr Wielki – Polish National Opera.

His choreographies were presented at the Polish National Dance Competition in Gdańsk (Poland), the International Gala of Ballet Stars in Szczecin (Poland), the 43rd International Dance Festival in Kuopio (Finland), a Polish-Russian gala at the Bolshoi Theatre (Moscow), Den Nye Opera in Bergen (Norway), the Dance Salad Festival in Houston (USA) and at the 2nd, 3rd, 4th, 5th and 6th Days of Dance at the Teatr Wielki – Polish National Opera.

In 2014 he devised Transfer Coefficient to music by Michał Jacaszek (Creations 6), Nevermore…? set to music by Prasqual, Steve Reich and Paweł Szymański (PBN), his own choreographic versions of Igor Stravinsky’s The Firebird and Béla Bartók’s The Miraculous Mandarin (Ballet of the Wrocław Opera), and a choreography for the Video Dance workshops run by the Institute of Music and Dance in Warsaw as part of the Body/Mind International Contemporary Dance Festival.

In 2017 Mr Bondara’s duo Butterflies in the stomach was presented in Tokyo by soloists of the Kraków Opera (Robert Kędziński, Mizuki Kurosawa), while his Take me with you (Creations 8) was performed by Roberto Bolle (La Scala/American Ballet Theater) and Melissa Hamilton (The Royal Ballet) at the Roberto Bolle and Friends Gala (Bologna, Florence, Rome, Spoleto, Verona, Santa Margherita di Pula) and by Yuka Ebihara and Dawid Trzensimiech in Osaka.

Robert Bondara received the Bronze Gloria Artis Medal for Services to Culture in 2016.