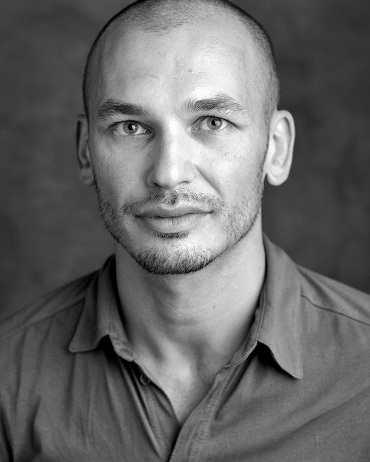 Tomasz Wygoda is a dancer, actor, choreographer, and educator. He graduated in history from the Pedagogy College in Kielce. In 1997–2003 he was a dancer with the Silesian Dance Theatre in Bytom, appearing in productions by Jacek Łumiński, Konrad Drzewiecki, Henrietta Horn, and Paul Clayden. He was also a guest dancer with Jonathan Hollander’s Battery Dance Company, NY, and was awarded a DanceWeb scholarship in Vienna. He has performed in the USA, UK, Germany, France, Canada, and Italy.

As a member of W&M Phisical Theatre he developed Made in Polska – museum of imagination (Calgary), while with Warsaw’s Breton Caffe Theatre he devised Slam out, Dancing Sarah Kane, and The Rite of Dreams, a solo inspired by Nijinsky’s diaries. He collaborates with the Stary Theatre in Kraków, peforming in productions by Krystian Lupa (Zaratustra, Factory 2), Paweł Miśkiewicz (Niewina), and Michał Zadara (Fedra). He also plays in Krzysztof Warlikowski’s Oczyszczeni (Współczesny Theatre in Wrocław, Polski Theatre in Poznań, TR Warszawa), Agnieszka Olsten’s Lincz and Samsara Disco (Polski Theatre in Wrocław), and Krzysztof Garbaczewski’s Kamienne niebo zamiast gwiazd (Nowy Theatre in Warsaw).