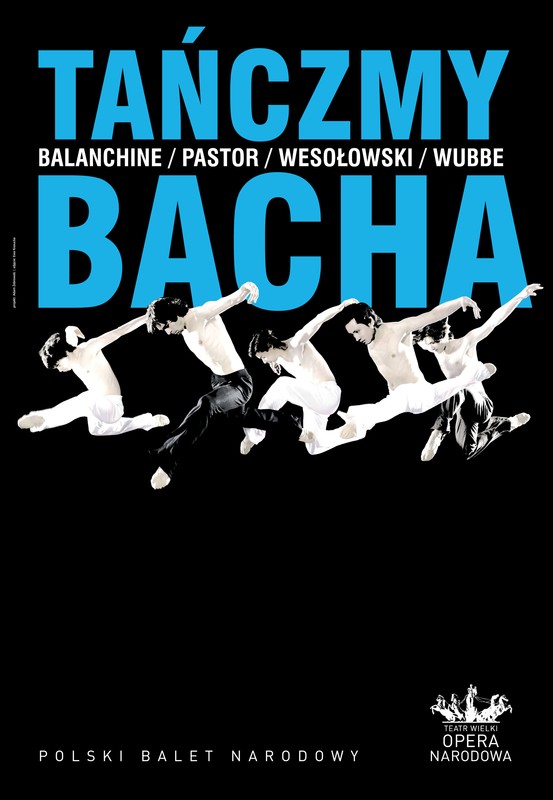 Polish ballet has seldom turned to the music of Bach which has inspired so many choreographers. This inexhaustible resource has been used by Balanchine, Lifar, Petit, Cranko, Béjart, Robbins, van Manen, and Neumeier, to mention only the greatest names of the 20th century. Now the time has come for us – thanks to Krzysztof Pastor, who has planned an entire ballet evening to the music of Bach. It will begin with a new work The Kisses by Emil Wesołowski to Bach’s Harpsichord Concerto in D Minor. Concerto Barocco by the legendary George Balanchine, an abstract ballet typical of his work, perfectly coordinated with Concerto in D Minor for Two Violins will also be featured. The great Dutch choreographer Ed Wubbe will present his original male ballet The Green, set to the choral introduction to the St. John Passion. To conclude, Krzysztof Pastor will show his own ballet hit In Light and Shadow to the music of the Aria from Goldberg Variations and Orchestral Suite No. 3 in D Major, which has already won loud applause in Amsterdam, Stockholm, Ankara, Glasgow, and Hong Kong, as well toured with the Dutch National Ballet in Holland, France, Canada, and presented by the Scottish Ballet at the Edinburgh Festival and in London. This promises to be an evening of choreographic surprises. [pch]

Four choreographers encourage us to dance Bach as if it were obvious that this music makes the feet invent an imaginative set of steps all by themselves. … The structure of Bach’s suites and concertos is so precise that whatever a choreographer adds could seem commonplace. Unless, that is, they can create an equally perfect form as that created 70 years ago by George Balanchine, whose Concerto Barocco is still considered one of the greatest classical ballets of the 20th century. … In The Green, Dutch choreographer Ed Wubbe has used the introduction to Bach’s St. John Passion. He wanted to express its mood, juxtaposing the insignificance of man with the greatness of God described in the music. … The main thing Emil Wesołowski has noticed in the music are images. His world-premiere production Kisses is not exhilaratingly original in the dance aspect, but is visually attractive. … During this evening, all the above pales when compared to In Light and Shadow by Krzysztof Pastor. He has delved the deepest into the world of Bach’s music, presenting its polyphonic multiplicity of themes. … This is an important premiere for the Polish National Ballet, which is becoming an increasingly interesting company. [Jacek Marczyński, Rzeczpospolita]