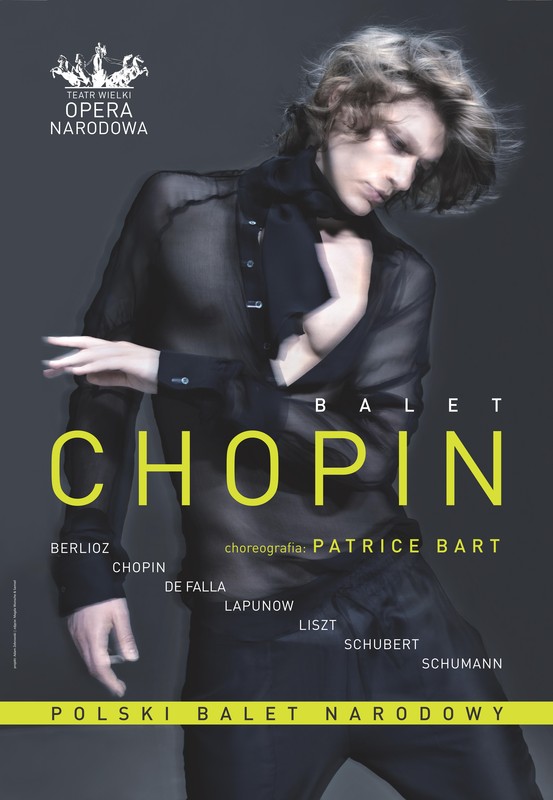 The most important ballet event of the Chopin Year. At the initiative of Waldemar Dąbrowski, director of the Teatr Wielki and coordinator of the Chopin celebrations, a new ballet was designed in Warsaw, invoking the great Polish Romantic’s life and history. The music includes not only pieces by Fryderyk Chopin but also composers who were influenced by his work. The production is choreographed by Patrice Bart, the great French ballet master from the Paris Opera, one of few contemporary choreographers specializing in producing new full-length ballets, a form greatly appreciated by the audiences of great opera houses. The inspiration came from Warsaw, but the ballet looks at the legend of the great Polish composer from the point of view of Paris with which Chopin had such close ties. At the end of the previous season, at the invitation of Valery Gergiev, the Polish National Ballet presented this production twice at the Mariinsky Theatre in St. Petersburg as part of the Stars of the White Nights Music Festival. [pch]

It’s not easy to present the inner image of an artist, and in a non-verbal version at that. On the other hand, dance is the best way of saying all that is the most elusive, what is hard to define in words. … Both the steps and the arrangement of the dancers’ bodies, every gesture and every movement made during the performance, are fully comprehensible. One could say that in many scenes, the audience are given ready-made content complete with interpretation, commentary, and message, to the extent that they don’t have to make an effort to decipher the symbolism of the images. It’s all handed over on a plate. Patrice Bart doesn’t shower the audience with any fireworks of ideas. His choreography contains practically no ‘new expression’, contrary to what some people expected. But it is precisely because this production doesn’t go beyond the clarity of every sign in the traditional sense of the word that it can easily appeal to young people, especially of school age. That’s important. [Temida Stankiewicz-Podhorecka, Nasz Dziennik]