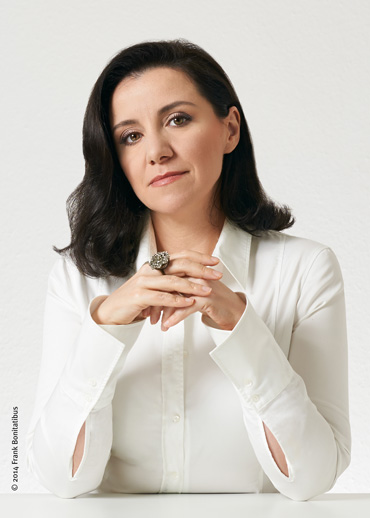 Anna Bonitatibus, a native of the Basilicata region of Italy, began studying music at the age of nine. She received a diploma with honours in both Piano and Voice. After winning several international competitions, she turned her attention to the study of the vocal techniques and repertoire of the 18th century and belcanto.

The range of Anna Bonitatibus’s interpretations now includes over fifty operatic titles. From her first recording made in 1992, La Griselda by Antonio Vivaldi, she distinguished herself by the operas of the fervent baroque period. Particularly noteworthy are her appearances in Neapolitan opera buffa and French repertoire. Thanks to her performances of the most important and familiar works of Mozart, Handel, and Rossini, she has performed on Europe’s most prestigious stages and in concert halls worldwide. Among the many characters played her travesti roles deserve a special mention as well as her performances in the sacred repertoire.

She made her debut at La Scala in 1999 in Don Giovanni under the baton of Maestro Riccardo Muti; in the same season she performed as Adalgisa in a new production of Norma at the Teatro di San Carlo in Naples.

Among her most recent debuts we would like to point-out title roles in Cavalli’s Didone as well as Handel’s Agrippina; Ariodante in Mayr’s Ginevra di Scozia and Verdi’s Requiem, which have received good reviews and enthusiastic acclaim by the audience. Debuts in new roles and in new prestigious venues have been already scheduled for Anna Bonitatibus’s upcoming seasons.