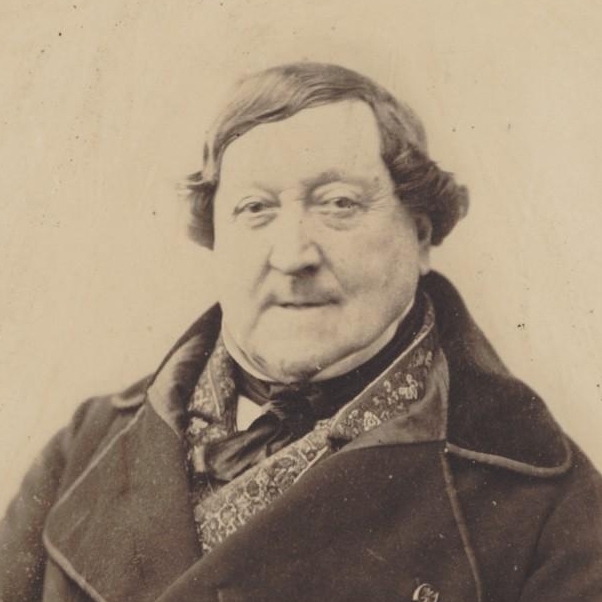 Gioacchino Rossini (1792–1868) – Italian composer and one of the most prominent creators of bel canto operas. He wrote thirty-nine operas, most of them comedies (opera buffa). Nevertheless, among the few serious operatic works he authored there are such masterpieces as Guillaume Tell.

Rossini was born in Pesaro, but his family moved to Bologna when he was very young. There he took up music lessons, playing the cello and studying counterpoint. At the age of 18 he staged his first opera in Venice, than in Milan, Bologna, and Rome. However, he had not become famous before the premiere of Tankred at the Teatro La Fenice in Venice. Another success came in 1816 when Rossini premiered The Barber of Seville, today recognised as one of the most important opera works in history. In the course of eight years between 1815 and 1823 Rossini composed twenty operas. In 1823 he visited Paris and London; the following year saw him becoming the director of the Théatre Italien in France’s capital. After his contract expired, Rossini stayed in Paris, working for the royal court. The year 1829 saw the debut of Guillaume Tell, one of the most important operas in the composer’s oeuvre, described by another Italian composer, Gaetano Donizetti in these words: ‘The first and last acts were written by Rossini; the second, by God!’. It also proved to be the Rossini’s last opera by the composer’s own decision. At that time his mother died, and soon afterwards Rossini found himself travelling to Bologna worried by the news of his father’s health deteriorating. He came back to Paris much later than expected; in July 1830 the city was taken over by a revolution. For the reminder of his life he would occasionally devote his time to composing, writing a few more significant works for voice and instruments and completing a collection of chamber pieces called Péchés de vieillesse (Sins of Old Age). Dying in 1868, Rossini left unfinished his last work, Petite messe solennelle which he himself described as ‘the last of my péchés de vieillesse’ (sins of old age). He died in Paris and was buried in the Père-Lachaise cemetery but nineteen years after, his remains were moved to Florence.

Despite achieving monumental fame, Rossini had been continuously pestered by the sense of squandering his talent and wasting the opportunities life offered him.   Rossini’s operas continue to be highly popular all over the world. Apart from The Barber of Seville, audiences are always eager to see and listen to Cinderella, The Italian Girl in Algiers, The Turk in Italy, Zelmira, or The Journey to Reims.