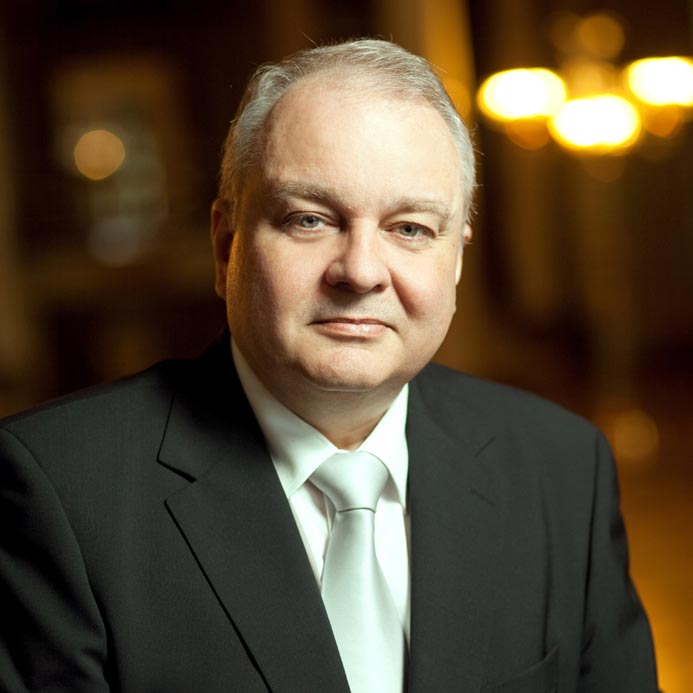 He is a graduate of the Academy of Music in Warsaw (1985), where he studied under Edmund Kossowski. He has won prizes of the International Vocal Competition in ‘s-Hertogenbosch (The Netherlands, 1987), the Jan Kiepura Competition in Krynica (Poland, Grand Prix, 1988) and international vocal competitions in Rio de Janeiro (Brazil, 1989) and Nantes (France, 1989). After his graduation, he joined the Warsaw Chamber Opera, where he sang the leading baritone parts in the operas of Donizetti, Mozart and Rossini, performing on many stages across Europe with this ensemble.

In the 1990/91 season he was a soloist with the Wiener Kammeroper, singing the part of Malatesta in Donizetti’s Don Pasquale and Almaviva in Mozart’s The Marriage of Figaro, and going on tour in Japan, South Korea and China. He has been working with the Teatr Wielki – Polish National Opera since 1993, singing the parts of Figaro in Rossini’s The Barber of Seville, Adam in Penderecki’s Paradise Lost, the title role in Verdi’s Macbeth, Anckarström in Un ballo in maschera, Albert in Massenet’s Werther, Sharpless in Puccini’s Madame Butterfly, the title role of Don Giovanni in the opera by Mozart and Méphistophèlés in Berlioz’s La Damnation de Faust. He also performed Stanislas Leszczynski in Penderecki’s Ubu Rex and title part in Szymanowski’s King Roger. In 2001, he was extremely successful as Sword-bearer in Moniuszko’s Haunted Manor. Then he performed in Verdi’s Othello (Iago), Rossini’s Il viaggio a Reims (Don Alvaro), Puccini’s La Rondine (Rambaldo), Tosca (Scarpia), Verdi’s Aida (Amonasro), Britten’s Curlew River (Traveller), Mozart’s The Magic Flute (Speaker), Donizetti’s Lucia di Lammermoor (Lord Enrico Asthon), Gounod’s Faust (Valentin) and Marcin Pakuła in Moniuszko’s Verbum nobile (2009).

He took part in a gala concert at the Opéra Bastille in Paris. He has performed with the BBC Scottish Orchestra in Glasgow, and given concerts at the State Theatre in Pretoria (South Africa). He has worked with the National Opera in Prague, and taken part in music festivals in Poland and abroad. In 1992, he performed with Placido Domingo in Zabrze, as his partner in fragments from Verdi’s Don Carlos and Puccini’s La bohème. He has recorded for Polish and foreign record companies.

In 2002, he appeared in Karol Szymanowski’s Stabat Mater, performed by the Radio Orchestra in Saarbrücken and conducted by Stanisław Skrowaczewski. He sang in Stabat Mater again in 2002, in a performance at Teatro La Fenice in Venice conducted by Jerzy Semkow. During a Japanese tour of the Polish National Opera in January 2003, he appeared together with José Cura in Giuseppe Verdi’s Othello, singing the part of Iago. In 2007 he performed the title role in Verdi’s Falstaff with the Polish Radio Orchestra conducted by Łukasz Borowicz.