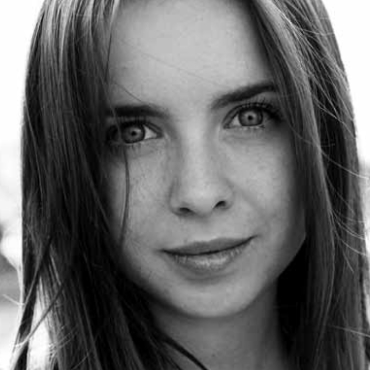 Born in 1990, she graduated from the Roman Turczynowicz Ballet school in Warsaw in 2009, joining the Polish National Ballet straight afterwards. She also studies communication, PR and media marketing at the University of Warsaw.

Anna Hop won prizes at the 1st Polish National Ballet Competition in Wrocław and the 15th Wojciech Wiesiołłowski Polish National Ballet Competition in Gdańsk. She received scholarships from the Prime Minister of Poland, the Dzieło Nowego Tysiąclecia Foundation, and the chairman of the Balet Foundation. She took part in the Maximum Dance Course in The Hague held by the Netherlands Dance Theater.

Since 2010 Anna has been presenting new choreographic miniatures every year at the workshop: in 2011 she showed Temat strachu to music by Kenji Eno (Cinematic Orchestra Remixes, Creations 3), in 2012 she came up with LAB V to 1950s pop music (Creations 4), and in 2013 she premiered COLLARS set to music by Meredith Monk (Creations 5). In June 2013 she staged at the Teatr Wielki – Polish National Opera 3xP Panda, Pandamonium, Pandarecki, a piece developed together with Zbigniew Czapski-Kłoda to music by Meredith Monk, Krzysztof Penderecki and Amona Tobinaas as part of an educational project. In October 2013 her piece for children titled Bajki Ci opowiem set to music by Witold Lutosławski, which she also produced,  premiered at the Szczecin opera house. In 2014 Anna led choreographic workshops for Polish and Norwegian teenagers as part of the project Recognising Through Dance. She also created one of the five choreographies presented at the project’s finale.