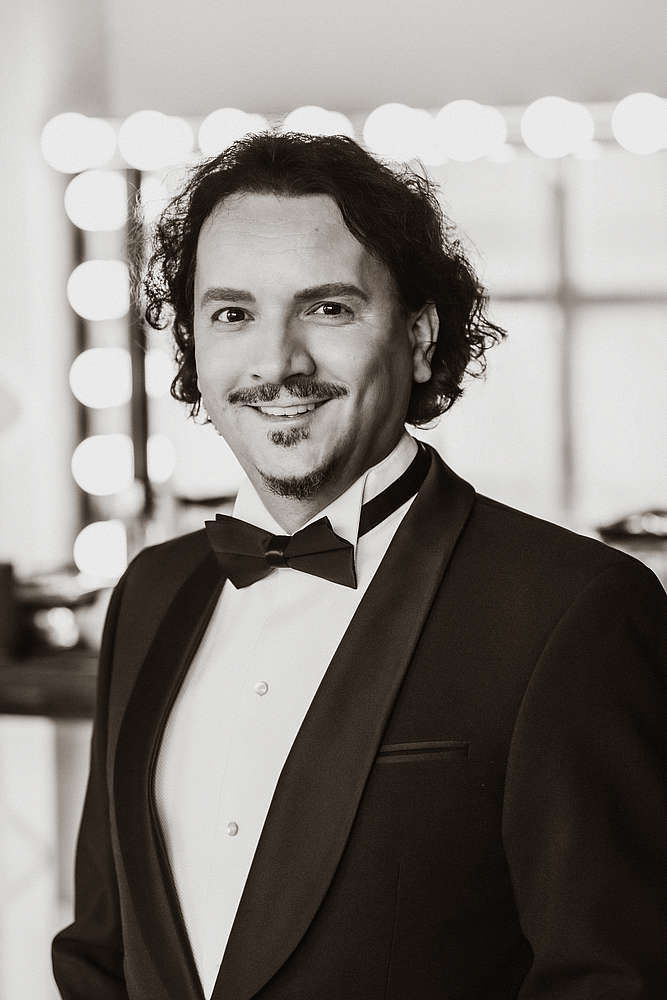 Verdian and belcanto baritone Artur Ruciński is one of the most accomplished, in-demand singers of the moment, captivating audiences around the world with his masterful technique and mesmerizing timbre.

Born in Warsaw, he studied at the Academy of Music in the class of professor J. Knetig and started building his repertoire in performances with Polish opera houses, including the Warsaw Chamber Opera, Krakow, Poznan, Wroclaw and at the Teatr Wielki – Polish National Opera in Warsaw where he made his debut in 2002 singing the title role in Onegin, of which Polish Music Journal reported: ‘Artur Ruciński’s beautiful singing and lyric quality was the highlight of the evening’. Soon followed invitations to sing Yeletsky in The Queen of Spades, title role in Onegin and Valentin in a new Robert Wilson production of Faust, Sharpless in Madama Butterfly, Ashton in Lucia di Lammermoor.

However, the turning point of his career came when M° Daniel Barenboim heard him and invited him on the spot to sing Eugene Onegin under his baton and alongside Rolando Villazon and René Pape at the Deutsche Staatsoper Berlin in March/April 2010.

The years that followed brought performances in many of the world’s most important opera houses and concert halls. The late music journalist Karl Löbl wrote of his Carmina Burana: ‘Baritone Discovery at Vienna Musikverein – take note of the name Artur Ruciński and go to every opera in which you can hear this singer’.
He appeared at Bregenz Festival (Tadeusz in Weinberg’s The Passenger), Teatro Liceu Barcelona (Król Roger), Hamburg State Oper (Lord Ashton in Lucia di Lammermoor), Valencia (Lescaut in Manon with Lorin Maazel conducting and Eugene Onegin, conducted by Maestro Wellber and recorded on DVD). He returned to Berlin to sing again under M° Barenboim, this time Conte Almaviva in Le Nozze di Figaro. In summer 2011, Artur Ruciński made his debut at the Arena di Verona with Roméo et Juliette (Mercutio) to much acclaim by press and public. He went on to sing I Masnadieri (Francesco di Moor), Messa di Gloria and Kindertotenlieder in Naples with M° Luisotti conducting.

January 2012 saw his UK debut, giving a solo Rosenblatt recital of opera arias and Tadeusz Baird’s Four Love Sonnets, settings of Polish translations from Shakespeare, at London’s St. John’s Smith Square in London. In May 2012, he made his American debut as Marcello in La Bohème with Los Angeles Opera, and in 2013 he debuted at the Opéra Bastille in Paris as Ford in Falstaff, and returned to Arena di Verona where he sang Il Trovatore (Conte di Luna) and La Traviata (Papa Germont).

Highlights in his career include I Masnadieri at the Teatro La Fenice in Venice and Festival Verdi in Parma, Il Trovatore at the Vienna Festwochen, and in January 2014 his first collaboration with M° Kirill Petrenko at the Munich State Opera (Eugene Onegin), followed by a new production of Falstaff at the Opera of Frankfurt am Main conducted by Bertrand de Billy, Attila (Ezio) in Warsaw and Eugene Onegin in Bologna. He debuted at the Royal Opera House in London as Giorgio Germont and at the prestigious Salzburg Festival as Conte di Luna, and then he sang the same role at La Fenice in Venezia. This was followed by another important debut: at La Scala with Simon Boccanegra (Paolo Albiani).

In the following years, he sang La Traviata at the Deutsche Oper Berlin, Eugene Onegin in Warsaw, Don Pasquale in Valencia, Lucia di Lammermoor in Hamburg and Zurich, Il Trovatore at Salzburg Festival, La Traviata and Il Trovatore at Arena di Verona, as well as the popular Christmas in Vienna concert at Vienna’s Konzerthaus and Szymanowski’s Stabat Mater with the RSO under Ingo Metzmacher at Wiener Musikverein. Moreover, he debuted the title role in Don Giovanni at Opéra Bastille in Paris, where he subsequently sang also Lucia di Lammermoor. He made his first appearance at the Metropolitan in New York in Madama Butterfly (Sharpless) and at the New National Theatre in Tokyo as Lord Ashton in Lucia di Lammermoor, and he returned to the Royal Opera House in London as Eugene Onegin, Lord Ashton and Germont, as well as to the Liceu in Barcelona as Marcello and Conte di Luna.

Numerous CD and DVD’s document the versatility of this exceptional young artist.