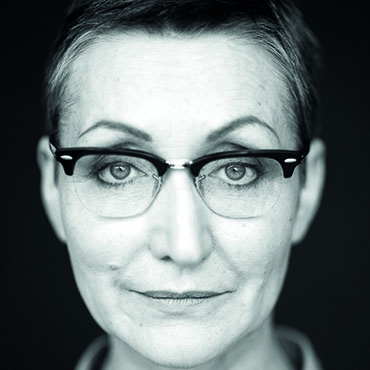 Born in Olsztyn, Poland, Joanna Klimas holds a degree in clinical psychology from the University of Warsaw. After a decade of practising as psychologist, she decided to take a six-month break from her profession. She never came back. In 1994 she got involved in reviving a failing clothing company. In its tailor room she first started to drape fabrics on mannequins, playing with forms, textures and colours. Her first designs revolutionised Poland’s fashion market, enamored in the 1990s – straight after the fall of Communism – with Western opulence. Her style was radically different and could be summed up in one word: minimalism. Her signature pieces were simple in form and awed with excellent tailoring and fine fabrics. When Elle magazine launched its Polish edition in 1994, Joanna Klimas’s designs were featured in the first issue, the magazine subsequently naming her the Best Designer in 1998 and 1999. In 1996 she opened a boutique in Warsaw, the first designer shop the Polish capital had seen. A year later she held pioneering fashion shows, introducing international standards into Polish fashion. The shows were set in the foyers of the Warsaw opera house and the Kongresowa Hall, Warsaw’s iconic concert hall located in the Palace of Science and Culture. The models would walk down the runway one after another, instead of presenting clothes while performing a choreography, as it had been done before. In 1997 she opened her atelier in an old lace factory in Burakowska St. in Warsaw, now a thriving post-industrial area. She was also the first in Poland to mount campaigns for her brand and publish lookbooks. In 2001 Joanna Klimas withdrew from the world of fashion. She was recharging her batteries designing costumes for opera productions, including Mariusz Treliński’s take on Onegin (2002). Her designs were featured in a 2003 book Tysiąc lat ubiorów w Police [A Thousand Years of Clothing in Poland] by Anna Sieradzka. In 2008 Klimas decided to come back to designing. She opened her atelier in an equally original location as before, Warsaw’s Muranów district. Apart from a designer studio and boutique, she also runs a cafe whose customers may admire her impressive collection of fashion and art books and magazines. She actively works for the development of the Muranów district.