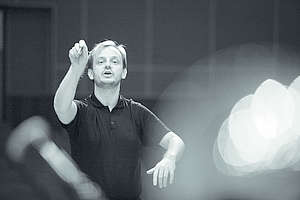 Born in 1972 in Gdynia, Poland, in 1996 Marcin Nałęcz-Niesiołowski graduated with honours from the Fryderyk Chopin Academy of Music in Warsaw with a diploma in symphony and opera conducting obtained under Bogusław Madey. He was the general manager and artistic director of the Białystok Philharmonic. At the same time he served as the artistic director and conductor of the Warsaw-based Mała Filharmonia chamber orchestra. He collaborates with symphony orchestras at home and abroad (Germany, Denmark, Spain). He has performed with the Warsaw Philharmonic Orchestra, NOSPR, Sinfonia Varsovia, Polish Radio Symphony Orchestra, Kraków Radio Symphony Orchestra, Orchestra of the Academy of Music in Warsaw, and more. Mr Nałęcz-Niesiołowski is a guest conductor of the Teatr Wielki – Polish National Opera.

His second field of interest is solo singing, which he studies under Professor Leonard Andrzej Mróz. Marcin Nałęcz-Niesiołowski is the winner of the first prize of Polish national competitions for violin and viola students held in Elbląg and the 4th Franciszka Platówna Singing Competition in Wrocław, where he also received a Grand Prix awarded by the Polish Ministry of Culture and Arts. He makes archive recordings for Polish Radio. He also records film scores and CDs, one of which, made with pianist Stanisław Drzewiecki, received a nomination for the Fryderyk Award (1998).

In 2005, together with the Białystok Philharmonic Orchestra and pianist Stanisław Drzewiecki, Mr Nałęcz-Niesiołowski performed at the European Parliament in Brussels to commemorate the 25th anniversary of the Solidarity movement. In June 2006 he conducted Russian soloists, choirs and the Podlasie Opera and Philharmonic Orchestra in a performance of Penderecki’s Utrenja at the Smolny Cathedral in St. Petersburg, Russia. In 2005 he was appointed the general manager and artistic director of the newly established Podlasie Opera and Philharmonic.

He is a recipient of a Polish culture minister’s Ad Astra Award for young artistic talents. For his services to culture and professional achievements he was presented with the Silver Cross of Merit and the Silver Gloria Artis Medal for Merit to Culture.