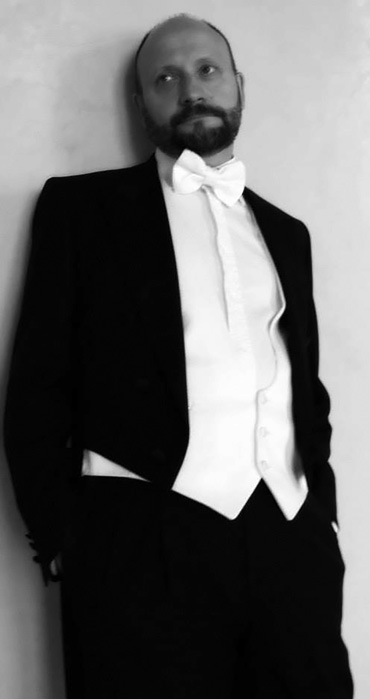 Italian conductor and composer, Marcovalerio Marietta embarked on his career at the age of 7 as a boy chorister for the most famous musical chapels of Rome. His formal studies began at the Pontifical Institute of Sacred Music, where he studied composition and conducting. He then became assistant to conductor A. Krieger, with whom he worked on the symphonic repertoire of South American, American, and German composers. He also studied opera conducting with Maurizio Rinaldi and Angel Campori. He was awarded a fellowship of the National College of Music and Arts of London (UK) and the Universidad Autonoma de Monterrey – Nuevo Leon (Mexico). He was the head conductor of Orchestra Barocca Italiana and Centro Italiano di Musica Antica. Engaged by Antonio Pappano as the chorus master and conductor of Accademia Nazionale di Santa Cecilia Foundation for the 2008/2009 concert season, the artist won critical acclaim and two international awards for the CD Colbran the Muse (Virgin Records). He is principal guest conductor at the Elena Teodorini Theatre in Craiova, Romania. He created the Rossini Opera Project in Monterrey, Mexico. Since 2004, he regularly performs as a guest conductor: Izhevsk Symphony Orchestra (Russia), Radio and Television Symphony Orchestra in Sarajevo (Bosnia and Hercegovina), Orchestra Summer in Vidin (Bulgaria), and the Romanian National Opera in Cluj-Napoca.

Gifted not only in the area of conducting, Maestro Marletta has also performed as a singer and instrumental soloist for the major Italian lyrical-symphonic institutions, and as a composer with many of his original compositions, transcriptions and orchestrations, being performed and published both in Italy and abroad. For his work as a musician he has received special commendation letters from composers such as Fabio Luisi, Ennio Morricone, Sir Antonio Pappano, Edward Shore and Louis Bacalov.

Marcovalerio Marietta studied philology and linguistics under Jesuit scholar Gianfranco Nolli. He has mastered English, French, Spanish, and German. He occasionally teaches and writes about the history of the Order of Malta, and has penned historical novels and papers. He has participated in courses of neurolinguistic programming, musical marketing, and fundraising, and served as economic consultant to a range of foundations. Since the 2014/15 season he has been the chorus master of the Teatr Wielki – Polish National Opera.