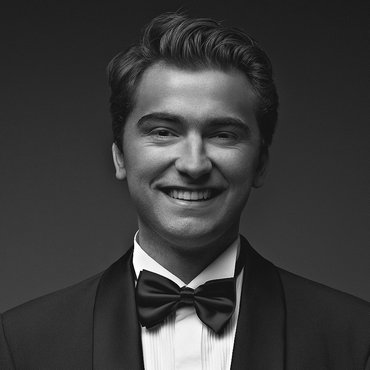 Mateusz Stachura holds a degree in opera performance from the Academy of Music in Łódź, where he studied voice under Professor Ziemowit Wojtczak. While still a student he made solo performances in a range of performances of the Musical Theatre in Łódź: Leonard Bernstein’s Wonderful Town (as Chick Clark), Jerry Bock’s Fiddler on the Roof (as Fyedka), Znasz-li ten kraj set to Stanisław Moniuszko’s music, and Powróćmy jak za dawnych lat. In December 2011 he took part in the theatre company’s guest performance of Fiddler on the Roof in Odessa.

Mr Stachura took part in number of master classes held in Poland and abroad, and led by such experienced coaches as: Anita Garanča, Olga Pasichnyk, Teresa Żylis-Gara, Udo Reinemann, Kaludi Kaludov, Maciej Pikulski, Andrzej Dobber, Doris Yarick-Cross, and Richard Cross. He was a participant of the Opera Academy, a young talent development programme of the Teatr Wielki – Polish National Opera. In 2012 he was invited, as part of a scholarship, to take part in Academie musicale de Villecroze and L’Academie des Heures Romantiques, prestigious French masterclass programmes.

In March 2015 Mr Stachura appeared at an Opera Gala held in Radom as part of the 19th Ludwig van Beethoven Easter Festival and performed the world premiere of Jan Krutul’s Litany to St. John Paul II with the Orchestra of the Podlasie Opera and Philharmonic (2015).

Not limiting his interests to classical music, he has been singing in a swing band Swing & Roll for the past five years. His jazz repertoire includes songs of Frank Sinatra, Michael Bublé, Louis Armstrong, Ray Charles, Eugeniusz Bodo, and Mieczysław Fogg. Since 2012 Mr Stachura has been a soloist of the Podlasie Opera and Philharmonic, where he sang Marek in the musical Korczak and Monostatos in Mozart’s The Magic Flute.