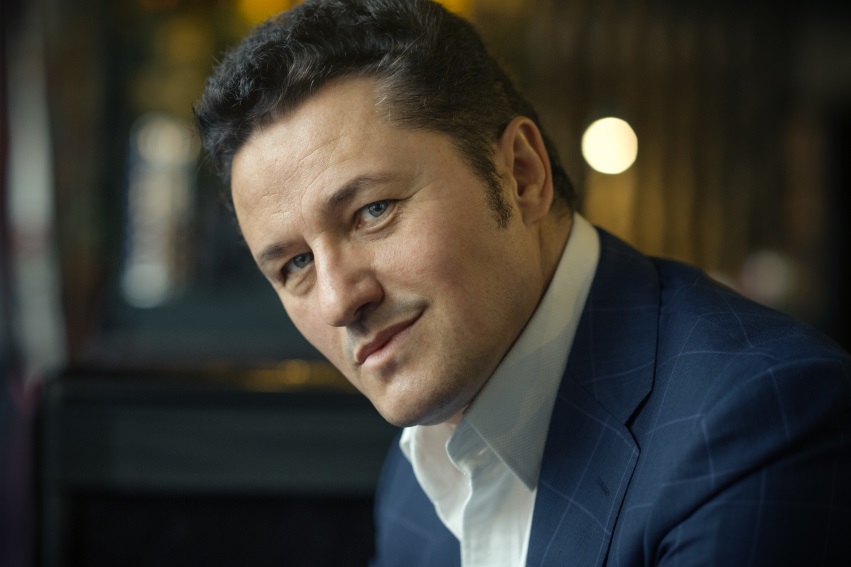 Piotr Beczala was born in Czechowice-Dziedzice in Southern Poland and received his initial vocal training at the Katowice Academy of Music, where he was given instruction by such illustrious singers as Pavel Lisitsian and Sena Jurinac. His first engagement was at the Landestheater Linz and in 1997 he became a company member of the Zürich Opera. The Zurich audience could hear him as Alfredo in La Traviata, Edgardo in Lucia di Lammermoor, the title role of Faust, Tamino in Die Zauberflöte, Elvino in La Sonnambula, Riccardo in Un Ballo in maschera, Rodolfo in La Bohème. In 2006 he made his debut at Teatro alla Scala in Milan singing Duke of Mantua in Rigoletto and returning later as Rodolfo in La Bohème.

In 2006 Piotr Beczala also made his house debut at the Metropolitan Opera in New York singing Duke of Mantua in a new production of Rigoletto. Here he has performed as Lensky in Tchaikovsky’s Eugene Onegin opposite Anna Netrebko, Prince in Dvorak’s Rusalka, Edgardo in Donizetti’s Lucia di Lammermoor, Rodolfo in Puccini’s La Bohème, as well as in the title roles in Gounod’s Roméo et Juliette and Faust. In the US he also was Tamino in Mozart’s The Magic Flute. In 2011 he accompanied the Met on a tour to Japan, singing Rodolfo and Edgardo.

In 2012 the tenor made his house debut at Gran Teatre del Liceu in Barcelona, where he sang in a concert version of Faust. He opened the 2013/14 season at Teatro all Scala in Milan, singing Alfredo in a new production of Verdi’s La Traviata.

The year 2012 saw Piotr Beczala make his role debut as Chevalier des Grieux in Laurent Pelly’s new production of Manon alongside Anna Netrebko as the eponymous heroine, conducted by Fabio Luisi. The production was part of the Met’s Live in HD series and was broadcast live in cinemas throughout the US and over 50 countries worldwide. It was released on DVD, as was his interpretation of the Duke in a new production of Rigoletto alongside Diana Damrau in January 2013, for which he received the ECHO Klassik Singer of the Year Award in 2014.

Piotr Beczala is a regular guest at the Salzburg Festival. Since his debut as Tamino in 1997 he has sung Prince in Rusalka, Roméo in Roméo et Juliette, the cantata Rinaldo by Johannes Brahms under the baton of Sir Elliott Gardiner at the Whitsun Festival, and Rodolfo in Damiano Michieletto’s new production of La Bohème opposite Anna Netrebko during the Summer Festival. The production was broadcast on TV and released on DVD by Deutsche Grammophon. Piotr Beczala also sang with Anna Netrebko in concert performances of Tchaikovsky’s Iolanta in 2011.

In 2013 he was heard in Verdi’s Requiem with the Wiener Philharmoniker and Riccardo Muti conducting. In addition to his operatic work, he has sung many of the great choral and orchestral vocal works with the world’s most distinguished orchestras and maestri. Celebrating his 20th stage anniversary Piotr Beczala gave a concert at the Teatr Wielki in Warsaw in 2012. Also in 2012 he sang the New Year’s Eve concerts at the Semperoper Dresden for the second consecutive year. The concerts, which were led by Christian Thielemann, were broadcast on TV and released on CD and DVD by Deutsche Grammophon.

In 2014 he joined a spectacular group of colleagues for Le Concert de Paris, an annual concert event and celebration at the Eiffel Tower with an estimated live audience of more than half a million people. Piotr Beczala’s is represented on dozens of CDs in a vast array of works, ranging from staples of the repertory, including Faust live from Vienna (Orfeo) and La Traviata from Munich (Farao), which was nominated for a 2008 Grammy Award, to such rarely-heard works as Szymanowski’s Król Roger and Offenbach’s Rheinnixen (Accord), or Johann Strauss II’s Simplicius (EMI). In addition, Piotr Beczala sings on a recording of Lucia di Lammermoor with Natalie Dessay in the title role and Valery Gergiev leading the Mariinsky Opera on the company’s own label.

In 2012 Piotr Beczała signed an exclusive artist of Deutsche Grammophon and released two solo albums for the label, My Heart’s Delight in 2013 and The French Collection in 2015. A DVD of his stunning debut in the title role of Lohengrin opposite Anna Netrebko as Elsa was released internationally in 2017.

Piotr Beczala’s 2018/19 season began and ended with new productions at Spain’s leading opera houses, a production of Gounod’s Faust at Teatro Real Madrid and a production of Verdi’s Luisa Miller at the Liceu Barcelona. He returned to the Metropolitan Opera New York for a new production of Adriana Lecouvreur opening on New Year’s Eve and made his role debut as Cavaradossi in Puccini’s Tosca in Vienna. Zurich audiences could hear him in a new production of Massenet’s Manon. Piotr Beczala was equally busy on the concert stage, with solo concerts and recitals amongst others at London’s Wigmore Hall, the Teatr Wielki in Warsaw, the Gran Teatre del Liceu Barcelona, both the Konzerthaus and Musikverein in Vienna, in Geneva and Dublin. Additionally, he joined the Chicago Symphony Orchestra and Riccardo Muti for performances of Verdi’s Requiem and returned to Bayreuth in the summer of 2019 to reprise his sensational Lohengrin from the previous year.

Piotr Beczala’s 2019/20 season begins on the concert stage: in Hamburg he sings alongside Angela Gheorghiu at the Elbphilharmonie and gives a recital at the Brucknerhaus Linz with pianist Helmut Deutsch. He starts his Spain recital tour in Valencia and continues to A Coruña, Sevilla, Zaragoza and Girona. Further concerts and recitals take him to Dresden’s Frauenkirche, where the German TV channel ZDF annually broadcasts the renowned Christmas concert, to the Musikverein and the Konzerthaus in Vienna, to the National Forum of Music in Wroclaw and to the Philharmonie in Essen. The tenor sings at the 64th Vienna Opera Ball and performs three Operetta galas at the Zurich Opera House. On the operatic stage, Piotr Beczala sings his role debut as Jontek in a new production of Stanislaw Moniuszko’s Halka at the Theater an der Wien and at the Teatr Wielki in Warsaw. He also returns to the Vienna State Opera for two productions of Lohengrin and Rusalka and performs the title role in Jules Massenet’s Werther at the Metropolitan Opera New York. Before ending the season at the Festival Castell Peralada with two performances of Aida, he sings the role of Rodolfo in La Bohème at the Royal Opera House Covent Garden in London and the title role of Lohengrin at the Zurich Opera House.

In 2019 Piotr Beczała was honoured as Kammersänger of the Vienna State Opera. His first solo album on Pentatone featuring versimo arias will be released in 2020.