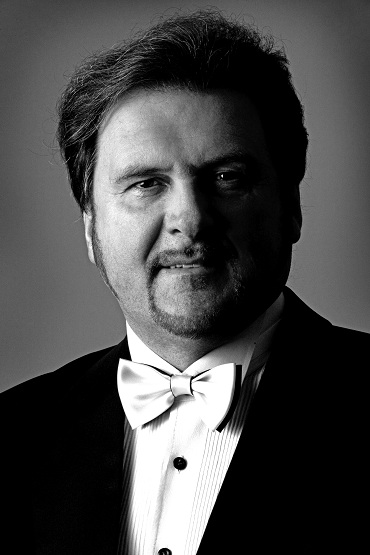 Robert Dymowski is a graduate of the Józef Elsner School of Music in Warsaw. He reached the finals of vocal competitions in Kudowa, Krynica Zdrój and Wrocław, Poland. He also participated in the Opera Festival in Jerusalem and sang Beethoven’s Symphiny No. 9 at Osterfest in Bregenz. In 1991 he became a soloist of the Teatr Wielki – Polish National Opera, debuting with the role of Banco in Verdi’s Macbeth.

He has worked with the opera houses of Wrocław, Łódź, and Bydgoszcz, the Music Theatre of Gdynia and Badisches Stadtstheater in Karlsruhe. He guested on the opera stages of Belgium, Greece, Spain, the Netherlands, Israel, Japan, Lithuania, Luxembourg, Germany, Russia, Switzerland, and Italy.

He may also boast successes in musicals and operettas. He has created the roles of Tevye the Milkman in Jerzy Gruza’s famous production of Bock’s Fiddler on the Roof, Nestor in Webber’s Cats, Baron Zeta in Lehár’s The Merry Widow, Feri in Kálmán’s The Gypsy Princess.

Robert Dymowski is also a renowned singer of contemporary music, especially works by Krzysztof Penderecki (Satan in Paradise Lost). He sang the leading role in the world premiere of Joanna Bruzdowicz’s Kolonia karna (Penal Colony). He gives concerts of Beethoven, Bach, and Moniuszko oratorios and cantatas.