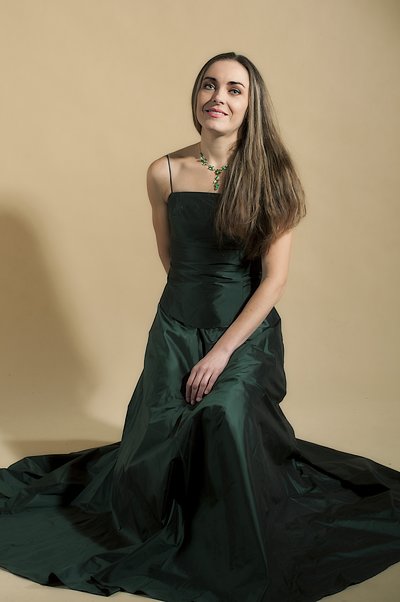 Mezzo-soprano Veronika Hajnová studied voice at the Conservatory and at the Academy of Performing Arts in Bratislava under Ľuba Baricová. She has participated in several master classes both in the Czech Republic and Germany. In 2002 she was a semi-finalist of the Belvedere International Singing Competition in Vienna, where she won the CNIPAL award. She was twice nominated to the Thalia Award: for her rendition of Dalila in Saint-Saëns’s Samson et Dalila and Joan of Arc in Tchaikovsky’s The Maid of Orleans.

While she was still studying, she guested at the Opera of the J.K. Tyl Theatre in Plzeň, becoming a member of the company in 2002. In the course of the next two years the sang Olga in Tchaikovsky’s Eugene Onegin, Kate in Dvorak’s The Devil and Kate, and Charlotte in Massenet’s Werther. Since 2004 she has been a soloist of Prague State Opera. She couples that with engagements at the National Theatre in Prague and Brno, e.g. as  Verdi’s Amneris (Aida) or Verdi’s Azucena (Il trovatore), Dvořák’s Witch (Rusalka), Bizet’s Carmen, and Wagner’s Venus (Tannhäuser). Her scale makes her an excellent performer of Mozart and Donizzetti operas. Recent highlights include: Venus in Tannhäuser at the National Theatre in Prague and Amneris and Carmen during a tour of Japon, Spain, Portugal, France, Hungary, Abu Dhabi, and Seoul.

Her repertoire also includes oratorios and songs, such as the part of Zefka in Janaček’s The Diary of One Who Disappeared (Czech Republic, Opera Bastille, Milan Festival), the mezzo part in Verdi’s Requiem (e.g. Opera Municipale Marseille under Diederich), songs by Schumann and Chopin (e.g. Chopin Festival in Mariánské Lázně) or Mahler’s Songs on the Death of Children (which she practiced with Italian conductor Alfonso Scarano and sang at the The Terezin Festival and in Italy).