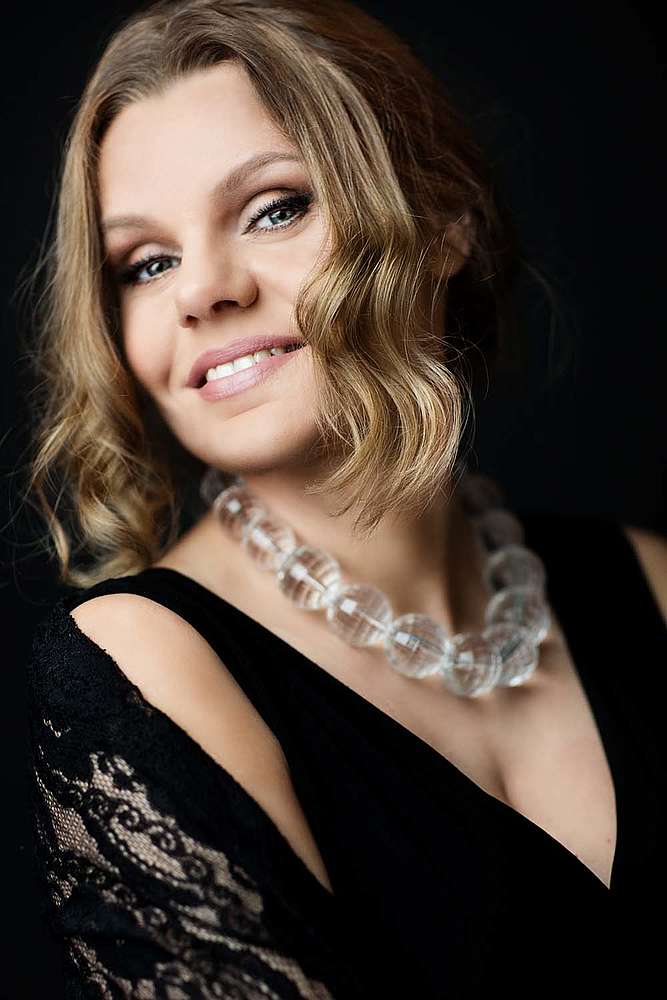 Agnieszka Rehlis graduated from the Academy of Music in Wrocław, Poland, where she studied with Barbara Ewa Werner. Since 2003 she has been training with Dariusz Grabowski.

Between 1996 and 2007 Ms Rehlis was a soloist of the Wrocław Opera, where she sang a range of significant roles. She was Laura in a new production of Ponchielli’s La Gioconda staged on the Odra river in Wrocław (TVP, 2003) and Aza in Paderewski’s Manru (DUX, Fryderyk for Best Polish Music Recording, 2004).

Between 1999 and 2017 Ms Rehlis often worked with Krzysztof Penderecki, performing in concerts led by the composer and other conductors. In November 2014 she sang in the world premiere of Penderecki’s Dies Illa in Brussels as part of Thousand Voices for Peace, a recording of which was included on the album Penderecki conducts Penderecki a year later (Grammy for Best Choral Performance, 2017).

In opera, Agnieszka Rehlis was Hannah in the world premiere of David Poutney’s production of Mieczysław Weinberg’s The Passenger at the Bregenz Festival, later reprising the role at the Houston Grand Opera, Lincoln Center Festival, Lyric Opera of Chicago, and Florida Grand Opera. She made a very successful debiut as Lisa, a leading role in the opera, at the Polish National Opera, Teatr Wielki. In Warsaw she could also be heard in many new productions, including Maffio Orsini in Donizetti’s Lucrezia Borgia, Hagar in Knapik’s Moby Dick, Marta in Tchaikovsky’s Iolanta, or Fenena in Verdi’s Nabucco. In 2016 she sang Amneris in Verdi’s Aida at the Estonian National Opera in Tallin.

Her performance as Adalhiza in Bellini’s Norma alongside Edita Gruberova at the Polish National Opera in 2017 was a turning point in her career. Having been associated for years with contemporary music, she was subsequently invited to perform at many international opera stages. She sang in Prokofiev’s The Fiery Angel at the Opernhaus Zürich, Scottish Opera, Festival d’Aix-en-Provence, and Polish National Opera, and was praised as Azucena in Verdi’s Il trovatore at the  DomStufen-Festspiele in Erfurt, Konzert Theater Bern, and recently at the Teatro de la Maestranza in Sevilla. She was Amneris and Carmen at the Aalto-Musiktheater Essen and National Theatre in Prague, Anna in Berlioz’s Les Troyens at the Semperoper Dresden, Fenena at the Bayerische Staatsoper in Munich, Khivrya in Mussorgsky’s The Fair at Sorochyntsi at the Komische Oper Berlin, and Waltraute in Wagner’s Götterdämmerung at the Teatro Campoamor in Oviedo.

In 2021 she triumphed as Azucena in Verdi’s Il trovatore at the Zürich Opernhaus opposite Piotr Beczała.

On 15 October 2021 she was awarded the Silver Gloria Artis Medal for Services to Culture by the Polish culture minister.