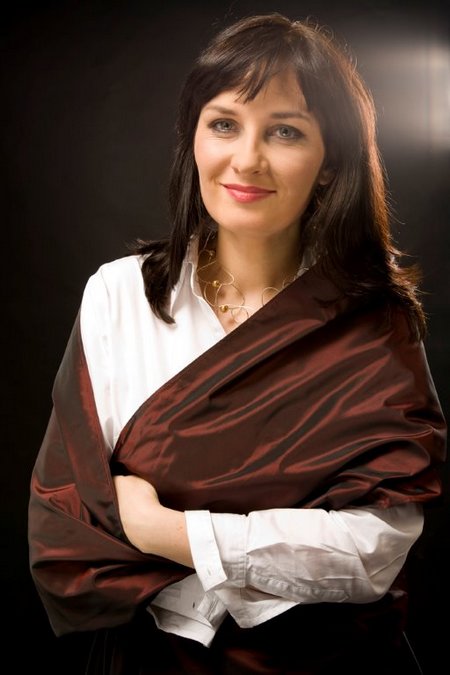 Anna Bednarska is the conductor and artistic director of the Alla Polacca Choir. She graduated from the Fryderyk Chopin Uniwersuty of Music in Warsaw, having studied under Professor Bogdan Gola, and the Musikhochschule Lübeck, where she had studied solo singing with Professor Ute Niss. She then trained her voice participating in masterclasses led by Barbara Schlick, Ingrid Kremling, Jadwiga Rappé, and Esther de Bros. She participated in choral seminars led by Philip Lawson, Andreas Mohr, Christiane Wieblitz, Krzysztof Szydzisz, Elżbieta Tworkowska, Alicja Szeluga, Markus Landerer, Mark Gandecki, and Agnieszka Franków-Żelazny.

While still a student, Ms Bednarska started working as soloist and voice projection teacher with the Warsaw Boys’ Choir led by Krzysztof Kusiel-Moroz. She sang numerous oratorios and cantatas at the Warsaw Philharmonic Hall and the Teatr Wielki – Polish National Opera. She also performed in the Netherlands, Switzerland, Norway, Italy, and Germany. She collaborated with the Warsaw Philharmonic Orchestra, Warsaw Chamber Orchestra, Kristiansand Kammerorkester, Sinfonia Varsovia, Concerto Avenna, and the Orchestra of the Jan Kiepura Mazovian Music Theatre in Warsaw. She founded a choir of the Polish Catholic Mission in Hamburg. She also led two women’s choirs which took part in a range of concerts and festivals in northern Germany.

From 2006 to 2010 she was the manager of the choir of the Jan Kiepura Mazovian Operetka Music Theatre in Warsa. In that capacity she worked on a production of J. Strauss’s The Bat directed by Wiesław Ochman and of E. Kalman’s Countess Maritza directed by Márta Mészáros. She worked as a chorus master with a male choir which performed the world premiere of Marek Sewen’s Soldiers’ Requiem under Sławomir Wróblewski (in association with the choir of the Warsaw Philharmonic). She has recored on CD and for the radio. She has shared the stage with Grzegorz Turnau and Józef Skrzek.

The Alla Polacca Choir was where Ms Bednarska started her music career. Her first solo engagements included a role in The Little Sweep and solo parts in G. B. Pergolesi’s  Stabat Mater and J. A. Hasse’s Miserere. Since 2010 she has been Alla Polacca’s conductor and voice projection specialist; in 2014 she also became its artistic director; the following year she established the Alla Polacca Nova Foundation, which takes care of the choir. Ms Bednarska rehearses the choir members before their performances at the Teatr Wielki – Polish National Opera and implements educational projects for children and young people.