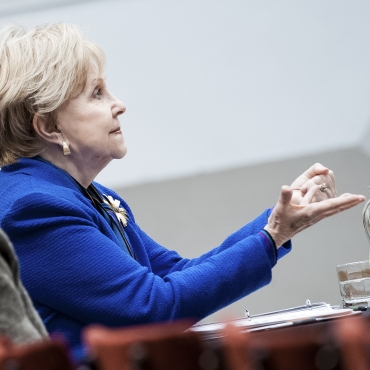 Doris Yarick-Cross is an internationally celebrated soprano and a distinguished teacher of singing. She is a professor and head of voice and opera at Yale and the director of the Yale Opera Program at the Yale School of Music. In her years as head of the Yale Opera Program, Yale has become one of the premiere training programs for young singers. Yale singers perform leading roles at the Metropolitan Opera as well as Chicago, San Francisco, New York City Opera, Covent Garden, La Scala, Berlin, Munich and Vienna.

Yarick-Cross has appeared with many of the major American opera companies, including the New York City Opera, Chicago Lyric, San Francisco, Boston, Seattle, San Antonio and Baltimore. Her debut took place under the baton of Leopold Stokowski at the New York City Opera in Monteverdi’s Orfeo. For many years a favorite at the Santa Fe Opera, she sang the role of Anne Trulove inRake’s Progress and Parasha in Mavra under Stravinsky’s supervision, as well as many other roles, including Pamina, Susanna, Despina, Mimi and Micaela. She toured Australia with the Sutherland-Williamson Opera Company, marking Joan Sutherland’s triumphant return to Australia, singing the roles of Tatyana in Eugene Onegin and Marguerite in Faust. In Germany she was heard frequently at the opera in Frankfurt am Main as well as many other European stages.

Doris Yarick-Cross has been a soloist with the New York Philharmonic, Pittsburgh, Seattle, Montreal, Québec and Minneapolis Symphonies. In Germany, with members of the Hessian Radio Orchestra, she has conducted Messiah, The Creation, Copland’s Lincoln Portrait, and the Requiem of Verdi and the German Requiem of Brahms. As a recitalist she has performed in 48 of the 50 United States and has recorded Lieder and French songs for the Hessian Radio.