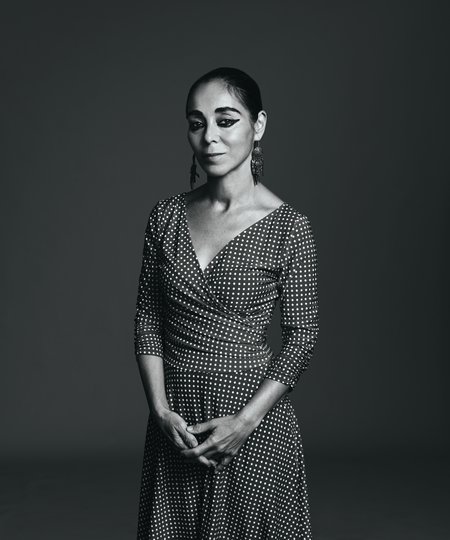 Shirin Neshat is an Iranian-born artist and filmmaker living in New York. Neshat’s early photographic works include the Women of Allah series (1993–1997), which explored the question of gender in relation to Islamic fundamentalism and militancy. Her subsequent video works departed from overtly political content or critique in favor of more poetic imagery and narratives. In 2009, Neshat directed her first feature-length film, Women Without Men, which received the Silver Lion Award for Best Director in the 66th Venice International Film Festival. Neshat’s recent photographic series include The Book of Kings (2012), Our House Is on Fire (2013), and The Home of My Eyes (2015).

Neshat has been the subject of numerous solo exhibitions at galleries and museums internationally, including the Stedelijk Museum, Amsterdam; the Serpentine Gallery, London; Hamburger Bahnhof, Berlin; the Walker Art Center, Minneapolis; the Musée d’art contemporain de Montréal; and the Detroit Institute of Arts. A major exhibition of her work recently opened at the Hirshhorn Museum and Sculpture Garden in Washington, DC. Shirin was included in the 48th Venice Biennale of Art (1999), Whitney Biennial (2000), Documenta XI (2002) and Prospect.1 New Orleans (2009). She was awarded the Grand Prix of the Gwangju Biennial (2000), the Golden Lion Award, the First International Prize at the 48th Venice Biennial (1999), the Hiroshima Freedom Prize (2005), and the Dorothy and Lillian Gish Prize (2006). Neshat is currently working on her second feature-length film, based on the life and art of the legendary Egyptian singer Oum Kulthum. Neshat is represented by Gladstone Gallery, New York and Brussels.