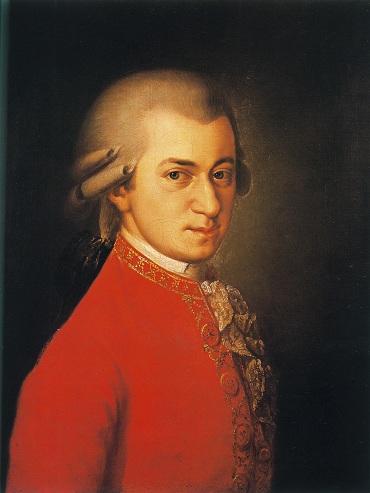 Wolfgang Amadeus Mozart (1756–1791) was an Austrian composer, one of the three great Vienna classics. Mozart’s father, Leopold, saw to his son’s musical education from his early childhood. Young Mozart started performing at 5, giving concerts with his only a bit older sister, Nannerl. Soon he became famous child prodigy across Europe, which, according to his father, was to ensure his financial stability in the future. Leopold strongly campaigned for his son’s engagement at the court of the archbishop of Salzburg, a post Wolfgang Amadeus did not want o accept, falling out with his father.

After a few years of intensive touring, the Mozarts settled in Vienna (1767–69). By that time the young artist had already composed some „mature” works for bigger line-ups and complex form. During his next tour, this time in Italy, he noted down Allegri’s Miserere (1770) from memory, which was perceived as another proof of his genius and legendary. Having returned from the tour at the beginning of 1772 he became a court concertmaster. In 1775 his first operas saw the light of day. He took lessons with the last of Bach’s sons, Johann Christian.

Whole his life Mozart fought against the employment policies of the time. He felt constrained by the stiff corset of professional relations and being dependent on one employer only. Unabated, he decided to be a freelance artist, a stance that was difficult to accept for many in the context of the social and political changes taking place in France at the time when a new civil society was emerging. His radicalism was highlighted by straightforward manner of behaving which bordered on impropriety, and was only recently ascribed by researchers to the Tourette syndrome, an ailment unknown in Mozart’s times.

Perceived as an eccentric, he led a life of financial ups and downs, frequently falling into debts. Artistically, he focused on the things he enjoyed writing most: operas, symphonies, and chamber pieces. He died suddenly of a bacterial infection in the process of composing Requiem. The coincidence of these two facts triggered speculations about him being poisoned by rivals. The story became the basis of Miloš Forman’s 1984 film Amadeus.